Chaos Bahamut (カオスバハムート, Kaosu Bahamūto?) is an antagonist that appears in Final Fantasy Dimensions II and serves as the physical form of the main antagonist of the Crystal of Time arc. It is a Chaos based on Mootie's God of Destruction form that Morrow and his friends encounter in the finale of the game's first arc.

After Morrow and his friends restore the flow of time to all the eras in history after defeating all Four Chaoses with the power of the four crystals, it appears that a new future is finally on the horizon. However before the party can return to their eras, a time quake occurs and Atomos guides the party to the Day of Reckoning in 2026, despite their previous erasing the event from history earlier.

Returning to Navos Forest on the Day of Reckoning in 2026, the party is knocked down by a mysterious darkness attempting to rip apart space-time. Out of the darkness emerges Mootie's God of Destruction form revived despite the Day of Reckoning being prevented. Morrow is able to recognize that the creature is not Mootie and it is instead a different creature he names Chaos Bahamut, a form created by Chaos that mimics Mootie's God of Destruction form, being created from Chaos stealing Mootie's cells from past encounters. For the remainder of the game, Chaos uses this form as a physical form for itself, in an attempt to force the Day of the Reckoning to occur. The party attempt to fight the creature, however they are nearly destroyed by its Gigaflare attack, only to be saved in the nick of time by Atomos.

After defeating the Four Chaoses once again, the party returns and attempt to defeat Chaos Bahamut once more; it disappears into a void, appearing the party has finally defeated it. However, Chaos Bahamut and the Chaoses revive once again and attempt to strike an unsuspecting Morrow, but Aemo pushes him out of the way and takes the fatal attack for him instead. The party escapes to find a way to heal Aemo.

Chaos Bahamut is fought multiple times throughout the game's final chapters. First as a scripted boss. During this fight, Chaos Bahamut cannot be defeated and will end the battle after five turns with Gigaflare.

Chaos Bahamut's special attack is Magic Breaking Technique, which dispels beneficial status effects on all enemies and delays their next turn. All versions of Chaos Bahamut are able to go up to rank 8. Summoning Chaos Bahamut costs 2 point from the Consumption Gauge.

Depending on the summon's rank, characters that are equipped with Chaos Bahamut are able to use the following abilities:

Chaos Bahamut's theme is "God of Destruction, Bahamut" and was composed by Naoshi Mizuta. It is a prominent theme, as it plays during the scenes and boss encounters with Chaos Bahamut through the game. The theme is the tenth track on the official Final Fantasy Legends: Toki no Suishō soundtrack.

The final boss theme for Neo Chaos Bahamut is "All Space and Time, Shaking Decisive Battle" and was also composed by Naoshi Mizuta. The theme plays during the second and third rounds with Neo Chaos Bahamut. The theme is the thirty-sixth track on the official soundtrack. 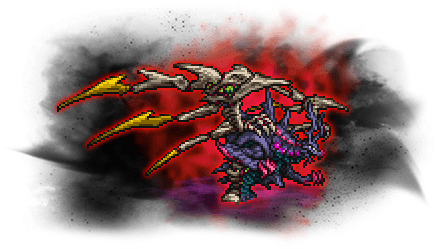