Cid Pollendina: Oh, shut up and help me remodel the Chaos (Mobius) page!
Please expand this article into a full one. The following tasks need to be completed:This request can be discussed on the associated discussion page. Remove this notice upon completion.

The lord general of the monstrous forces invading Palamecia. No one knows either the intent or the cause for Chaos's invasion. He only seems interested in destroying all that stands in his path. While it is prophesied that the Warrior of Light will defeat him, no one knows when this will occur, or if it will happen at all.

Chaos (カオス, Kaosu?) is a non-player character and the main antagonist in Mobius Final Fantasy. He is based on the main villain of the original Final Fantasy, and the dualism of light and darkness, and harmony and chaos, has been a recurring theme throughout the Final Fantasy series since its inception.

Lord Chaos was a village noble seeking to marry Sarah Cornelia, who refused his advances as she was in love with Cid. Chaos cut off the village's water supply in retaliation, and Sarah relented. Chaos, knowing Sarah was not truly in love with him, was not satisfied.

A figure named Voyce informed Lord Chaos of rumors spreading around Palamecia, about Sarah's suspected affection for the town's best swordsman. On Voyce's advice, Chaos organized a tournament for which Palamecians were allowed to create rules, called the Laws of Palamecia. Cid was then entered into the tournament against his wishes by his brother Mid, who hoped Cid would use his victory as leverage to order the town's water supply returned.

While it was ostensibly to prove the might of Palamecia's best swordsman, the tournament was rigged in Cid's favor so Chaos would kill him in the finals and win Sarah's favor. When Mid discovered this, Chaos ordered his men to kill him, and severely injure Cid before the final match. However, Cid was announced the winner by default, officially because Chaos had been too gravely injured in the semifinals.

In truth, Chaos had voluntarily pulled out of the finals because Sarah had begged him to not kill Cid, and promised to do anything he wanted in return.

Despite the coverup, rumors abounded after the tournament and Chaos was ridiculed by Palamecia's populace. Sarah tried to be a diligent wife to him, but Chaos's suspicions kept him from realizing this, and he grew to hate Sarah and all Palamecians. He did not return the village's water supply and took his anger out on Sarah, which drove her to attempt to kill herself in despair.

Chaos was killed in a duel with Cid, who'd been rallied to save Sarah by Voyce. After falling into the town's oceans, Chaos lived on through his resentment of Cid, and his tainted soul began to create monsters out of water, collectively dubbed "Chaos" after him.

Effectively, Chaos became an inseparable part of Palamecia, existing as long as the world still does and returning in due time after every defeat. The monsters continually attacked Palamecia, and Cid repeatedly defeated Chaos and his forces until he grew too old and frail to continue the fight.

Chaos appears in the vicinity of Castle Cornelia, where several blanks give up on their prophecy to protect Princess Sarah. Wol confronts Chaos but is unable to defeat him and Chaos retreats. Chaos pursues Wol after noticing he has grown stronger, but after talking to Vox, he targets Mogheim. Wol intercepts him, but not before Chaos kills several moogles who attempted to delay him. Chaos kills Mowg as well, then summons Marilith who is defeated by Wol. Vox teleports Chaos away. 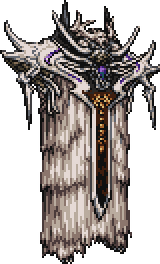 Chaos appears as a boss in Final Fantasy Record Keeper. He is first fought in the Den of Chaos (Heroic) dungeon in the Event A Heretic Waits.

Ability card.
Add a photo to this gallery