Tutelary deity of the sacred crystals fashioned by the gods at the time of the Great Making. Created in opposition to Mitron the Chastiser, scion of light. Upon entering the world of Man, he was enveloped in the turmoil rampant there. Lost, he died and was reborn countless times, a walker of life's wheel, eventually to rage against the gods that had so fated him. By sitting in meditation upon the Uneh Pedestal does he clear heart and mind until all that has order and reason and thought is made as nothing.

Chaos, Walker of the Wheel (輪廻王カオス, Rinne Ō Kaosu?, lit. Chaos, King of Reincarnation) is an Esper from the world of Ivalice. The Esper of Wind, he represents the zodiac sign of Taurus, the Bull. Chaos has two large horns similar to those of a bull. From his power of wind, his color sign is gray. He is also referred to as the Vrishabha Ascendant, which is the Sanskrit name of its zodiac sign as used in Jyotish (Hindu) astrology.

Chaos is an Esper residing in the Necrohol of Nabudis, in the Cloister of the Highborn. He was sealed following the Battle of Nabudis by a group of nu mou wielding powerful magicks, trapping him in a physical location in addition to the spiritual binding the gods had already placed on the Espers. The nu mou binding has weakened over time, and they search for people brave enough to defeat the Esper. To find Chaos, the player needs to collect three medallions and defeat two optional bosses, Fury and Humbaba Mistant.

Walker of the Wheel who writes his foes' fates in flame.

Chaos returns, along with the other Espers, as a Rank III flying-type Fire summon. He is Mydia's final summon and appears in Mission 39: Wayward Soul at the Feol Warren. Chaos is backed up by many other Fire-type Yarhi, including Wyverns.

Defeating Chaos earns Kytes's Quickening, which is reminiscent of Chaos's four elemental attacks in Final Fantasy XII, except that Kytes's final attack is Fire as opposed to Wind, since Chaos is aligned with Fire this time around. 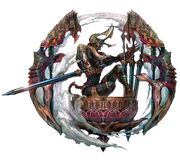 Chaos returns as a Scion and can be summoned by anyone who has the Ring of the Wheel equipped. When summoned, he uses his Tornado attack, inflicting Wind-based damage on all enemies.

Chaos appears as a boss. 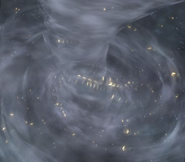 The Ivalician Chaos takes his name and appearance from the final boss of the original Final Fantasy: Chaos. Their stories are similar too, both being caught in an endless cycle of life and death. The four swords surrounding Chaos most likely represent the Four Fiends of the original Final Fantasy, especially since, during his ultimate attack, each sword glows red, yellow, green, and blue, representing Marilith of Fire, Lich of Earth, Tiamat of Wind and Kraken of Water, respectively. Also, when the swords drop (see Tornado's animation), the green (Wind) sword is the last to drop, given that Chaos is Wind-elemental here. In Dissidia, when Chaos uses his ultimate attack, four swords stab into the arena, similar to Tornado.

Chaos's title in Japanese features the word (輪廻, Rinne?), which is the Japanese term for Saṃsāra, the endless cycle of life, death, and rebirth in Buddhism, Hinduism, and other Indian religions. This conveys his multiple deaths and reincarnations throughout time. The pedestal he sits on symbolizes Padmasana, an adorned base used to represent those who have attained enlightenment, but comes with an inverted meaning of a false enlightenment. Enveloped in hatred and with a perverse want to destroy everything until nothing remains, correlates with the concept of Shunyata, one goal of Buddhism entailing the need for all to return to nothingness. In consideration with Chaos's past mythology in the series and his Buddhist themes, his nature may also refer to the destructive and malignant use of The Void.

Chaos's description states he went through many deaths and rebirths. This references how, in the original Final Fantasy, Garland, who eventually becomes Chaos, was in an infinite cycle of death and rebirth.

He is also referred to as the Vrishabha Ascendant, which is the Sanskrit name of its zodiac sign as used in Jyotish (Hindu) astrology.