Tutelary deity of the sacred crystals fashioned by the gods at the time of the Great Making. Created in opposition to Mitron the Chastiser, scion of light. Upon entering the world of Man, he was enveloped in the turmoil rampant there. Lost, he died and was reborn countless times, a walker of life's wheel, eventually to rage against the gods that had so fated him. By sitting in meditation upon the Unrh Pedestal does he clear heart and mind until all that has order and reason and thought is made as nothing.

Attack command sealed - characters will not be able to use the "Attack" command.

Attack command sealed - characters will not be able to use the "Attack" command.

Before the player can fight Chaos, a sidequest must be completed to obtain the appointed keys.

On the battlefield, attack commands are sealed. Chaos tends to use Fearga, which reduces the entire party's MP. His special attack is Aeroja that inflicts Confusion. Chaos inflicts Silence often and his normal attacks inflict Disable. Chaos can be inflicted with Sap and Slow.

Since there is no save crystal before the fight, it is best ensure all party members are in top-notch condition. Windbreakers are helpful in mitigating damage, and the player can switch equipment when Chaos readies his special attack.

It is useful to place gambits to use Nu Khai Sand (Smelling Salts) or Remedy to deal with Confuse from Aeroja. It is also good to be stocked up on Echo Herbs.

The player can either go the physical route with Souleater, Telekinesis, and Gil Toss, or put up Reflect and bounce non-elemental spells at Chaos. Knots of Rust can be used to damage Chaos as well as the elementals. Drain and Balance can also be used.

Chaos's attacks can inflict Disable, so it would be a good idea to equip Black Belts. Using the Nihopalaoa + Remedy trick to inflict Sap and Slow on him also helps. 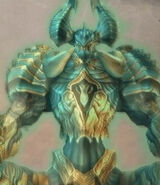 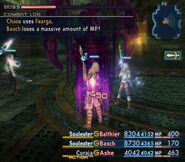 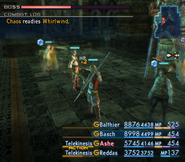