Chaos is a recurring demonic creature in the series, but Vincent as Chaos is the only incarnation of it in the Final Fantasy series that is portrayed as clearly on the heroes' side; it is not necessarily benevolent, but only because Vincent himself is.

Chaos's appearance has varied, but maintains the theme of a devil and infernal being.

In Final Fantasy VII, Chaos is a dark gray-skinned devil with a muscular build, a bald head with elongated ears, and typical features of western demons, such as horns, hooves and bat wings.

In Dirge of Cerberus -Final Fantasy VII-, Chaos appears as if its powers have been violently spliced with Vincent's being, resulting in a ragged, worn, and wicked-looking demonic Vincent. Many features of his clothes have merged with Chaos' features: his cape has become its wings (which he can fold up to resemble a hang glider-like cape), his headband has merged with his hair and is warped into a large crest of horn-like protrusions, and the remainder of his clothes have melded with his skin forming what appears to be an exoskeleton with muscular definitions and various protrusions of organic yet corrupted features. His golden gauntlet has merged with his arm. The sabatons of his boots have become "hooves". His left pectoral is carved out and features the Protomateria where his heart should be. He has light gray skin, gold eyes with light gray sclerae (that appear as red when his irises are glowing), and small black-slitted pupils, fang-like teeth, four thin "cuts" on his face (one under each eye and at each end of his mouth), and golden diamond-shaped "kneepads".

Stated in the Omega Reports, Chaos was described in an ancient Cetra tablet. A team of scientists that included Grimoire Valentine and Lucrecia Crescent found a small pool of tainted Lifestream within the Crystal Cave and hypothesized Chaos would arrive there at the destined time, and later excavated the Protomateria from its depths.

With samples of the Mako and the newly discovered Protomateria brought back for experimentation, Grimoire died in an experiment associated with the discovery. Shinra Electric Power Company used the tainted Mako to create stronger SOLDIERs within Deepground resulting in the birth of Nero the Sable. The scientific investigation of Chaos and Omega came to a stop when other scientists dismissed and criticized Lucrecia's report.

When Vincent meets Rosso the Crimson the two fight with Vincent losing as he is unaware of the strength of his opponent. When Vincent emerges a few seconds after being defeated, he is Chaos, and knocks Rosso away. Vincent has control over himself while in this form as the Protomateria is within his body. Vincent later awakens to find himself in a regenerative chamber in the World Regenesis Organization (WRO) headquarters. Shalua Rui, who found him and brought him to the WRO to recover, releases him, and tells him about Lucrecia's research on Chaos, but Deepground attacks forcing him to leave his questions until later and fight.

When Vincent is in the Shinra Manor in Nibelheim, he finds a piece of Materia that contains a recording from Lucrecia. Lucrecia explains what Chaos and Omega mean to the planet and tells Vincent Omega will be the end of the world, though she does not mention the part Chaos plays in this.

Vincent comes across Rosso, and after a talk she flees. He chases after her to the mansion entrance where he fights a Black Widow robot. Afterward Rosso catches Vincent off-guard and removes a piece of Materia from his chest. Vincent transforms into Chaos, but instantly reverts. Rosso comments Vincent cannot control Chaos without the Materia she just extracted, but before she can kill him Yuffie arrives and rescues him.

Chaos becomes increasingly unstable within Vincent. Aboard the Shera he briefly becomes Chaos, tearing gouges into the wall, but is brought out by a vision of Lucrecia approaching him, snapping him out of it. He gets another bout of Chaos outside the Shinra Building in the ruins of Midgar where Shelke explains that after the Protomateria was taken from him, his mental defense against Chaos was weakened and he is losing control. She explains that Chaos, while a part of Vincent, acts independently, and explains that Chaos shall be born before the planet dies to gather all life for Omega.

Chaos is a semi-Weapon (a creature of magnificent power created by the planet) that acts according to the will of another Weapon, Omega, that the planet calls forth in a time of threat. Chaos is a being born of negative memories and the sins within a naturally occurring stagnated and tainted form of Lifestream. Should the stagnant Lifestream increase in unusually high quantities, its ultimate purpose is to act as an executioner of all life and harbinger of death. This is triggered by the planet's reaction to this imbalance upon periods of great catastrophe, decline, and mass planetary-scale destruction, to allow the rest of the planet's Lifestream to be gathered to a new planet to continue the cycle of life.

Chaos appears after Azul knocks Vincent unconscious after their fight. Chaos goes wild, impales Azul with his gun and knocks him off the elevator they were on. Vincent flashes back to the time after he was shot by Hojo and Lucrecia was trying to revive him. Hojo comments on Chaos and Omega, but no information is given on them. Chaos is mentioned in another flashback where Lucrecia and Grimoire Valentine, Vincent's father and a fellow scientist interested in Chaos and Omega, are in the Crystal Cave which, according to Grimoire, is where Chaos will awaken.

Hojo, or rather, a digital version of him inside Weiss, explains to Vincent how Chaos exists within him. Due to Hojo's experiments of Vincent many years ago, Vincent's body became durable enough for Chaos to exist inside him. He says Chaos is born of a tainted Lifestream. Vincent tries to use Chaos to fight Weiss but fails. Vincent hallucinates Lucrecia standing in front of him; she tells him to try and control Chaos, not let Chaos control him. Via the Protomateria within Weiss Vincent uses Chaos' power while retaining his human form and defeats Weiss.

Chaos takes full control over Vincent's body when Omega is summoned, according to Shelke, to counterbalance Omega's appearance. Shelke uses a Synaptic Net Dive to retrieve the Protomateria and return it to Vincent so he can control Chaos. It is revealed that after Vincent was shot by Hojo and experimented on, he was still dying. Lucrecia infused tainted Lifestream into him, as she believed her thesis on Chaos could save him. While this stopped Vincent's body from decaying he became permanently Chaos. Lucrecia discovered the Protomateria and used it so Vincent could control Chaos, but he resumed decaying, as when Lucrecia tried to use it, her computer screen flashed red. It is unknown what happened to Vincent after this, or how he stopped decaying, but due to the events of Final Fantasy VII and its flashbacks, it can be assumed Vincent woke up and realized what he had become, and willingly went into a deep slumber.

Vincent as Chaos combats Omega and Weiss. After the battle Omega ascends so Vincent uses Chaos to destroy it. Back in the Crystal Cave where Lucrecia lies crystallized, Vincent tells her Chaos and Omega have returned to the planet. 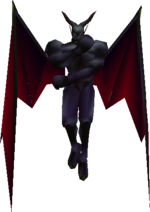 Vincent is an optional character, and thus the player can bypass seeing Chaos at all. Chaos is Vincent's ultimate Limit Break obtained after visiting Lucrecia's Cave with Vincent in the party, viewing the events there, and returning after fighting between 2 to 11 random encounters. Examining the altar afterward receives the manual, along with the Death Penalty weapon, which is Vincent's ultimate weapon. To use the manual, Vincent must have obtained his other Limit Breaks.

In the PC re-release, obtaining Chaos unlocks the Chaos achievement. 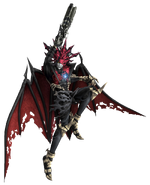 Although Vincent retains the ability to turn into Chaos and maintains control of himself at the start, the player cannot transform him into Chaos during gameplay like they can with his Galian Beast form. Chaos becomes playable during the game's final level. The form allows him to hover briefly, perform a combo attack consisting of various claw swipes and kicks ending with a sphere of energy, perform a large jump equal to a double jump, and wield a more threatening variation of the Death Penalty gun (his final weapon from Final Fantasy VII), which gains power as it collects the souls of the wicked.

Chaos can appear as an image when Vincent's gun is charged, and each charged shots that is fired can create an image of his Limit Break alter egos upon each successful hit. 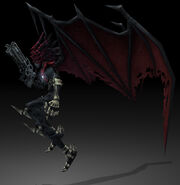 Vincent's Chaos may have been intended as an allusion to the character of Chaos from the original Final Fantasy.