But I will be reborn once more. So even as you die, again and again, I shall return. Born again in this endless cycle I have created!

Chaos is the antagonist and the final boss of the original Final Fantasy. He is a demonic monster who maintains a time loop. He is the quintessential Final Fantasy antagonist and final boss, many future villains paying homage to him. The elements of chaos and harmony, often represented by darkness and light, have become a recurring theme in the series.

Chaos is a horned demon with large wings, sharp claws and a tail. His kneecaps depict monster faces. Chaos's demonic appearance may have been based on Gustave Doré's illustrations of Satan (Devil or Lucifer) from John Milton's Paradise Lost. In Final Fantasy a dragon's head emerges from his stomach, but in Dissidia this has been changed to a loincloth depicting a dragon, held with another monster face buckle. In Dissidia he has four arms and a darker coloration–he is more brown-toned in Final Fantasy, and more black and purple in Dissidia.

Chaos seeks immortality and creates a time loop to live forever. He is the antithesis to the light and harmony represented by the Crystals.

Garland was a knight of the kingdom of Cornelia who gained much respect through his power and skill. He was the best of the knights, but became corrupted by power. He abducted Princess Sarah and fled to the Chaos Shrine demanding the King of Cornelia hand control of the kingdom in exchange for her life.

The Warriors of Light defeat Garland and rescue Sarah. Afterward, the warriors travel the world to fight the Four Fiends of Chaos that had drained the Crystals of their power. The power of the Crystals the Fiends had drained was funneled into a Dark Crystal in the Chaos Shrine, opening a portal to the past.

With the Crystals restored, the Warriors of Light are told the Fiends were sent from two thousand years ago, and their master is in that time. Using the Dark Crystal the Warriors travel to the past and defeat the Fiends again, and find Garland alive. Garland tells the Warriors of Light that the power of the Four Fiends in the present sent him to the past when he was on the brink of death after his defeat. Garland then sent the Four Fiends in the past to the present. Doing this, Garland has created a time loop that will allow him to live forever.

Garland absorbs the Fiends' power and transforms into Chaos to do battle with the heroes. Chaos is defeated and the time loop is broken, restoring the land. Though Chaos is erased, Garland remains in the reformed present the Warriors of Light return to. In Final Fantasy: Memory of Heroes Chaos is defeated by the Warrior alone.

The ending narrative of Final Fantasy states that the Four Fiends were created when Garland's hatred merged with the four elements of the world. This explains why the Four Fiends are referred to as the Four Chaoses (四つのカオス, Yottsu no kaosu??) in the Japanese version.

Chaos is fought as the final boss. He is remembered for his noteworthy death animation, which shows him disintegrating, a somewhat innovative phenomenon in games for the NES. This style of death was repeated for final bosses of future games in the series.

In the NES version Chaos uses the standard battle theme, but later editions give him his own music.

In the NES version his battle's music is "Battle Scene", while in the WonderSwan Color version "Last Battle" plays.

In Theatrhythm Final Fantasy the theme used in the Battle Music Sequence (BMS) is an arranged version of the "Chaos Shrine" theme, which can also be heard in the menus for the Chaos Shrine section. 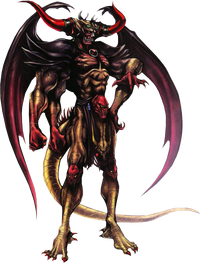 Chaos is the God of Discord and the main antagonist. He summons enemies from other universes to defeat Cosmos, the Goddess of Harmony, who has summoned heroes to fight Chaos's forces in an endless cycle of war. Unlike the Chaos of the original Final Fantasy, who was identified as another form of Garland, it is unclear what relationship Garland of the Dissidia series has with this incarnation of Chaos.

Chaos is a manikin created by Onrac researchers and Cid of the Lufaine to be used as a weapon against other nations in World A. Raised by Cid and his wife until he matured, Chaos was taken away by the Onrac military and a manikin of his mother, Cosmos, was used to coerce him into obeying. When Cid and his wife attempted to rescue Chaos, his mother was shot, and in his hatred Chaos opened a portal to the Interdimensional Rift, which drew him, Cid and Cosmos into World B, where the events of the original Dissidia and Dissidia 012 Final Fantasy take place.

In this new world, the three were met by Garland who felt he and Chaos are linked. Cid made a deal with the holy dragon Shinryu to pit Chaos against Cosmos in war, which would empower Chaos and eventually allow Cid to return home to seek revenge on Onrac. Chaos's memory faded over time and Cid and Cosmos only appear as fragments in his dreams. During the 13th cycle, Garland tells Chaos that before Cid called him to World B to partake in the cycles, Chaos sent Garland back in time 2000 years to become Chaos himself. During this cycle Cosmos's warriors vanquish Chaos, though his will is eventually inherited by the god Spiritus.[1]

In Dissidia 012, Chaos returns as the God of Discord along with his previous warriors. A bestial form, Feral Chaos, is the result of Chaos going berserk after winning too many times against Cosmos in a nightmare world Shinryu has imprisoned Cid in. When five warriors manifest in this nightmare world, they destroy Feral Chaos, shattering the nightmare and freeing Cid. As he dies, Feral Chaos regains his senses, and thanks the warriors for freeing his father.

Dissidia 012 provides inconsistent information regarding Garland and Chaos's relationship. During the Conclusion of the Cycle chapter, Garland claims that he and Chaos are the same being. However, Report 12 suggests that Garland met Chaos for the first time after being pulled into World B and even named Chaos. The specifics of Garland's connection with Chaos are never clarified.

Chaos is a boss in the Omega series of raids, making his entrance in the Alphascape. Having proven himself among the strongest of Omega's creations, Chaos is pitted against the Warrior of Light's party, using many of his elemental attacks seen in previous incarnations, as well as manipulating the arena to enhance them. He is defeated and erased from the interdimensional rift.

Chaos's true name is Garland, the same who was defeated by the Warriors of Light. Retreating in time, he sends copies of himself into the future to change his fate. Destroy Chaos to free the world.

Chaos is the "final boss", fought after accumulating 20,000 Rhythmia.

In an endless battle against the goddess Cosmos, victory has bloated this god of disorder's powers and the hour of the end seems near. In search of the ultimate chaos, this dark lord will disrupt the eternal cycle of life...

Chaos is a playable character unlocked by collecting 20000 Rhythmia points, leading to an encounter with Chaos where the player must win. As an enemy, he returns as a normal encounter, in addition to his Feral Chaos form, who is fought after accumulating 40000 Rhythmia points.

He is an Overpowered character. His Limit, Utter Chaos, deals damage in proportion to his Strength and Magic.

Feral Chaos.
Add a photo to this gallery 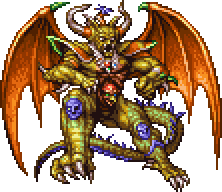 Chaos appears as an ability card in Mobius Final Fantasy.

Chaos's ability card.
Add a photo to this gallery

Trading card of Feral Chaos from Theatrhythm Curtain Call.
Add a photo to this gallery

Chaos is mentioned in the introduction of the Final Fantasy Portal App's Triple Triad.

Chaos appeared as part of the Final Fantasy collaboration. He was introduced in the event that happened in the North American version November 2–15, 2015. When fought in the Netherworld, he uses Cyclone, Blaze, Blizzaga, Flare, Curaga and Haste. After defeating him, he drops Cloud's Buster Sword.

He was obtainable as a 4-star ranked unit named "Chaos", with a devil type and dark and light elements.

As a 4-star ranked unit, Chaos appears in his standard form and emits a dark aura. His active skill is Soul of Oblivion and his leader skill is I will be reborn again here.

Master Creatures Kai 2 figure.
Add a photo to this gallery

for the original Final Fantasy, likely being modeled after it.