Sacrifice HP to restore twice as much to an ally.

Chant (おまじない, Omajinai?, lit. Magic Chant)[note 1], also known as Wish or Festal Cant, is a recurring ability in the series. It is a beneficial ability, either granting positive statuses to the party or healing party members.

Chant is an ability of the Squire class that both Ramza and Delita use, learned for no JP with a range and effect of 1. It sacrifices half of the user's HP to restores HP to one adjacent ally equal to double the amount sacrificed.

In the War of the Lions version, Luso's class, Game Hunter, can also learn Chant.

Festal Cant I-III are support abilities available only for Morrow to use. The spells can only be learned from the Moogle signet. All Festal Cant abilities restore HP to a single ally and additionally cures poison, darkness, and silence. The potency of the ability increases with the each version and all cost 12 MP to use.

In the original free-to-play versions, Festal Cant I-III could be used by any party member equipped with a Festal Cant version of the Moogle signet.

Chant is a Soul Break exclusive to Ramza learned through the Genji Gloves (FFT). It increases the critical damage of all allies by 50% for the duration of 25 seconds and grants them a barrier that protects from damage up to 30% of each ally's HP. It is used at the expense of a Soul Gauge and takes 30'000 AP to learn. 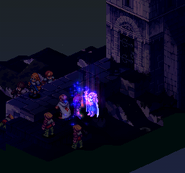 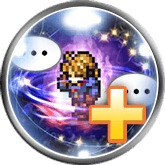