Restores some HP to all other party members.

Chakra is available to Sabin at level 23.

Gogo can also use any Blitz techniques that Sabin has learned by equipping Blitz in Gogo's ability menu. This allows Gogo to use Chakra.

Chakra is input using the following inputs, depending on platform:

Due to a glitch, if Sabin is confused and uses Chakra when there is one opponent, they are healed for 9,999 HP.

Chakra can be a practical curative ability due to Sabin's naturally high HP and the ability's zero MP cost. When Sabin is close to high HP, it can be a very MP and turn-efficient means to heal the other party members; in points of the story when there are fewer than three other party members, Chakra is an even greater heal.

Chakra's healing relies on Sabin's current HP, meaning his health should be kept topped up. Sabin can be given relics, such as Angel Ring and Miracle Shoes, to keep his HP high to achieve this end. In many cases later on, however, when the Osmose spell and Celestriad are available, the cost of simply casting Curaga on the party is mitigated, and Chakra's healing portion is less useful.

The ability to cure multiple dangerous statuses makes Chakra remain useful. Though Ribbon and other status-resisting relics can mitigate the need for Chakra somewhat, it remains an extremely efficient means of curing dangerous ailments from the party in one turn.

Gogo's naturally lower HP compared to Sabin means that Gogo will not be able to heal as much with Chakra as Sabin. However, as with Sabin, the ability to cure negative statuses remains useful. 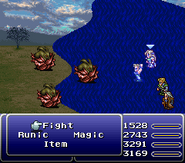 [view · edit · purge]Mantra means a sacred utterance, numinous sound, or a syllable, word, phonemes, or group of words believed by some to have psychological and spiritual power. Mantra may or may not be syntactic or have literal meaning; the spiritual value of mantra comes when it is audible, visible, or present in thought.