Damages or instantly dispatches an enemy. Use with the Tools command.

The Chainsaw (かいてんのこぎり, Kaiten Nokogiri?), also called Chain Saw, ChainSaw, and Saw, is a recurring weapon in the Final Fantasy series. In the majority of its appearances, this weapon is known to be able to cause damage or inflict Instant Death on its target.

Chainsaw is part of Edgar's Tools command. It can't be bought, but found in Zozo or stolen from Duel Armors. It deals physical damage to one opponent, is unblockable, and ignores defense. There's a 25% chance of inflicting Death instead, works against undead but fails on targets immune to Death. The Death attack is considered a magical attack.

The Chainsaw is Barret's gun-arm, a weapon type specific to him. It has an attack power of 52 with an accuracy of 100 and grants 10 to Magic. It has one paired Materia slot with a single Materia slot. The weapon's attribute is Cut. It can be bought in Wutai for 6,300 gil.

The Saw is a weapon that is famous for its glitch. It can be bought in Southwest Town for 4,000 GP. It has 30 uses, and the damage formula for Saw is based on Agility. It inflicts Dead to an enemy if it hits.

The ChainSaw can be bought for 6,800 GP in Lynn's Village and Port Town. It has 30 uses, it also increases a Robot's HP by 45 and increases their Agl by 10. The damage formula for ChainSaw is the user's Str x10. It inflicts Stun, but cannot cut if Str < Def - 9; or against

Saw has a whip icon before its name. It has an attack power of 280 and it can be bought for 18000 G at Cirrus in Pureland. It gives cyborgs 130 HP when equipped. It has a 50% chance of inflicting Fatal.

The mechanized sword favored by a line of desert kings. A rotating blade gets through the foe's defenses. 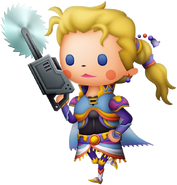 A chainsaw or chain saw is a portable, mechanical saw powered by electricity, compressed air, hydraulic power, or most commonly a gasoline two-stroke engine.