Counter attacks in goddess form with Lullaby, Phantasm, Charm, and Doom's Kiss, so wait until it's an evil spirit. Attacks with Flash Rain, Bolt 2 and Bolt 3.

Chadarnook is a boss in Final Fantasy VI fought in Owzer's Mansion in the World of Ruin. It is a demon possessing a painting of the esper Lakshmi, whose magicite Owzer has stored in his bookshelf. Owzer bought the magicite at auction, and felt a need to have someone paint Lakshmi. Owzer hired various painters, but none were able to paint her to his satisfaction. When he heard of Relm Arrowny he hired her, but as she is painting, the demon tries to possess the artwork, and attacks the party.

The Demon and the Goddess alternate. The Demon switches places when damaged five times or after a period of time, while the Goddess switches with the Demon when she takes enough turns in battle. Only the Demon can be killed; the Goddess regenerates if it runs out of HP. When the Demon falls the battle is won.

The Goddess counters most attacks with Poltergeist, which inflicts HP Leak on the party, a status similar to Sap that cannot be cured and will continuously drain the party's HP. It can also use Entice to inflict a similar status to Confuse that cannot be cured. The Demon uses Thundara, Thundaga, and Flash Rain to attack. The Demon is weak to Fire and Holy.

The party must focus their efforts on the Demon. Any Lightning-absorbing equipment the party has will greatly reduce the threat. Firaga, Holy, Flare, and Ultima spells, as well as Blitz, Tools, Bushido, and Throw work well. When the Goddess appears, it is recommended to defend, since Poltergeist can be annoying. When the Demon appears, an all-out offensive is in order. If Celes is in the party, she can be equipped with Dragoon Boots to use Jump on the Goddess and Runic on the Demon.

If attacked by anything: Thundara (33%)

If killed: Kill Self

If attacked by anything: Poltergeist (33%)

Demon Chadarnook is the boss of Sigmascape V2.0, as part of the Omega raid storyline in Final Fantasy XIV: Stormblood. The fight is based on the Final Fantasy VI fight. Demon Chadarnook is accompanied by the painting of the goddess, who appears in the enemy list as Goddess Chadarnook, and cannot be attacked. Demon Chadarnook will periodically Possess one of four paintings arranged in the arena, and use their power to attack the party with elemental magic. The party must use a Chocobo Brush on unfinished sketches to create creatures or objects to defend against Chadarnook's magic, similar to Relm's Sketch ability.

Chadarnook is a daemon that lives in a haunted painting in the town of Altissia. The player gets a quest to photograph it from Vyv Dorden. Like in Final Fantasy VI, the ghost changes between goddess and demon forms. The painting the daemon emerges from is called Lakshmi. 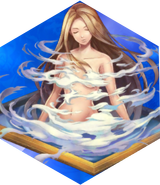 Phantom stone (Rank 5).
Add a photo to this gallery

In the North American Super NES release of Final Fantasy VI, the Chadarnook was censored with additional fog drawn to cover her up more, including her midriff and the tops of her breasts with a visible cleavage line. The Playstation version used the original uncensored version of her sprite, while the Gameboy Advance release gave her a censored sprite with additional fog, but the fog is different from the censored Super NES version and apparently was redrawn. The iOS and Steam releases use the uncensored sprite.

The Demon in the iOS version.

The Goddess in the iOS version.
Add a photo to this gallery
Retrieved from "https://finalfantasy.fandom.com/wiki/Chadarnook_(Final_Fantasy_VI)?oldid=3368773"
Community content is available under CC-BY-SA unless otherwise noted.