Spell-weaving lizards with wings that are usually found floating about the train graveyard.

Cerulean Drake is a flying biological enemy in Final Fantasy VII Remake, fought in the quest "Just Flew In from the Graveyard" in Chapter 3, and also as regular enemies in Chapter 11, "Haunted", and in Chapter 15, "The Day Midgar Stood Still". It is a fast enemy that uses magical

Ice attacks and teaches a skill if the player has the

Hitting them with spells and inflicting a certain amount of damage makes them susceptible to staggering. The icy winds that surround them are harmful, but can be temporarily stilled with spells of an element other than ice.
Enemy skills can be learned from this monster.

Just Flew In from the Graveyard, Clear the Way, The Climb, The Crumbling Building

The Enemy Skill "Algid Aura" can be learned from cerulean drakes.

Hitting the cerulean drake with wind spells and inflicting a certain amount of damage makes it susceptible to staggering. The icy winds that surround it deal damage if a player character comes into contact with it, but can be temporarily stilled with spells of an element other than ice. It may target a party member for ice attacks with Frozen Barbs and then continuously attack them with icicles.

The Enemy Skill "Algid Aura" can be learned from cerulean drakes.

Being a flying enemy, it is tricky for Cloud and Tifa to hit with their normal attacks during the sidequest for the monster during Chapter 3. They can use magic instead, preferably wind spells, which also helps stagger it. Using any weapons and other equipment that prioritize magic use thus work well. Just being near the enemy when it has Icy Aura deals damage, so the player may want to avoid it and use magic from afar. When the drake falls to the ground the player can unleash Cloud's Braver, or one of Tifa's combos imbued with Unbridled Strength. 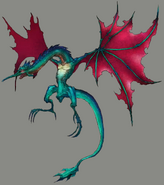 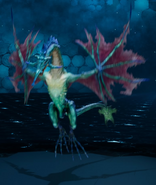