Cerobi Steppe is normally accessible after the events in Draklor Laboratory, but it is actually possible to enter before going to Archades, by taking a chocobo from Phon Coast and riding it over Tchita Uplands all the way east to the The Shaded Path. The player must talk to the "Game Hunter" standing near the debris, then ascend the debris to enter Cerobi Steppe. However, the Balfonheim Port will be blocked by the Sky Watch.

Cerobi Steppe is littered in treasures that have a small chance of containing a special rare item when the Diamond Armlet is equipped. It is possible to exploit the so-called RNG method to obtain the rare item 100% of the time by exploiting the game console's predictable "random number generator".

In the original version, it is also possible to farm Hi-Ethers at the Feddik River area. All of the 10 chests in the area spawn 50% of the time, with 50% chance of containing items, one such being a Leather Gorget, and, 50% to give a Hi-Ether if the treasure is items, without equipping the Diamond Armlet.

The Vyraal is a Rank V Mark whose hunt can be undertaken after the events in Draklor Laboratory are complete. The mark can be found in The Northsward area and enemies will be cleared out when the player enters it. The hunt is petitioned by the Viera Wayfarer in the Whitecap pub in Balfonheim. The player will also receive the Viera Rucksack after the battle, which the Viera Wayfarer will take back when the hunt is reported. She lets the player keep the Dragon Scale, item part of the Wyrm Philosopher quest (see below).

The player must have spoken to the "Huntmaster" in Phon Coast and defeated Thalassinon and spoken to one of the three bangaa outfitters, which start of the Hunt Club quest. Aspidochelon then has a 40% chance of spawning among the Adamantitans in the Feddik River (three-way split area) area of the Cerobi Steppe.

The best idea is to steal Scarletite from it, then leave the area without killing it, as once killed, Aspidochelon will never respawn. That way the player can get more than one Scarletite from the rare game. Scarletite is an essential loot item in the making of the Tournesol.

To find the Bluesang the player must have spoken to the "Huntmaster" in Phon Coast and defeated Thalassinon; Bluesang then has a 40% chance of appearing in the Crossfield area between the windmills. If the player is trying to get the Tournesol, the Bluesang is one of the earlier and easier sources of one required Bazaar ingredient, Gemsteel. The player can acquire the Damascus Steel by stealing the item once, exiting two areas and repeating the process, until they have six Damascus Steels. Being a Trophy Rare Game, the Bluesang does not reappear after being killed.

There are ten windmills scattered around the area. After having fixed the gate leading to Phon Coast, the moogles of the Craftsmoogles' League can be found in the windmills. During the fishing minigame/sidequest, the player gets a hint to stop certain windmills to get a Hi-Ether and a hint for the Matamune Fishing rod quest. The windmills that must turned on are: No.1, No.2, No.5, No.7, and No.9.

The theme that plays on Cerobi Steppe is simply called "The Cerobi Steppe". This theme returns in Final Fantasy XII: Revenant Wings as the theme for exploring Lemurés' overworld. 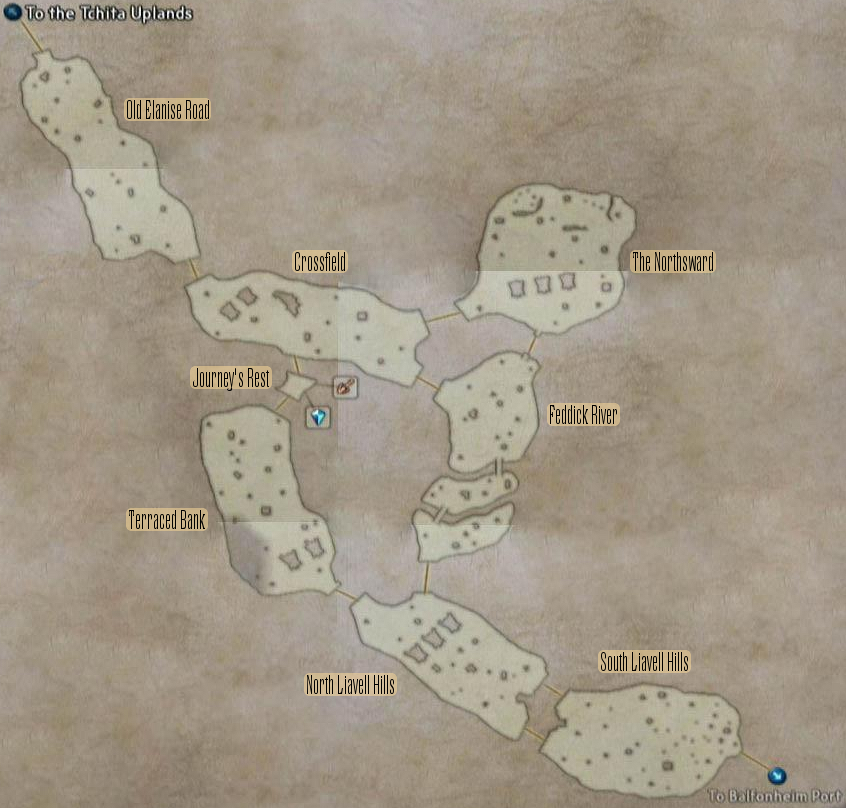 If the player finds the Seitengrat, an ultimate secret bow added to the Zodiac versions, an arrow (currently equipped arrow type) will appear in the Cerobi Steppe suspended a few feet in the air while the bow is equipped. It is found near the entrance to Old Elanise Road from the Tchita Uplands.

The area where Slyt is fought in Pharos seems to be the rock circle in the pond situated in the middle of Cerobi Steppe. This landmark can be viewed from the Crossfield, Feddik River, North Liavell Hills, Terraced Bank, and Journey's Rest zones.