When the world becomes shrouded in darkness, his gun will toll a dreadful dirge...

Cerberus is a triple-barreled, triple-cylindered revolver, ornamented with scrollwork patterns, a small dog's head in place of the iron sights on each barrel, and a silver chain in the shape of a three-headed dog with a wing hanging from the end of the grip. Both the keychain and the gun itself are derived from Ancient Greek mythology, where Cerberus, the three-headed hellhound, guarded the gates to Hades's underworld.

The Cerberus is a semi-automatic, break loading revolver with three barrels and three cylinders. It is initially capable of holding 18 shots at once, having six chambers per cylinder. The gun is reloaded by a breaking mechanism that tilts the barrels and cylinders at an angle, allowing the ejection of spent cartridges and the placement of fresh rounds, ending with a flick of the wrist that snaps the barrels back into place. Three bullets are fired at once, allowing for only six shots per reload.

With in-game customization in Dirge of Cerberus -Final Fantasy VII-, Cerberus can become lighter, more powerful, or hold more ammunition. A Materia slot can be equipped on a chain, allowing the use of different Materia to cast spells from its barrels. Accessories, such as a scope for accuracy and automatic reloading mechanisms, can also be equipped for added dependability.

The Cerberus first appears when Vincent arrives in a ghost-like form to save Cloud Strife. From the swirling cloak, bullets are continuously shot at Kadaj, three at a time. It is not until the battle with Bahamut SIN in Edge that the gun is fully seen, which is put to good use in the battle. At one point in the battle, Vincent can be seen stopping on the top of a spire to reload the Cerberus. Vincent carries his gun in a holster attached to his right thigh.

The Cerberus is Vincent's default weapon. Although no explanation is given about the weapon's appearance, more information is given about the gun itself in the customization screens. It can be fitted with short, normal, and long barrels, with the normal barrel as the standard length. As opposed to Final Fantasy VII: Advent Children, Vincent carries an arsenal of mysterious guns, including the Hydra, a bolt-action rifle, the Griffon, a Thompson-style machine gun, and a new version of his ultimate weapon from Final Fantasy VII, the Death Penalty. The Cerberus is best for close to mid-range shooting, but equipping a long barrel will enable it to shoot at long distances with ease.

During the Training Program, a plain silver Cerberus with no decorations is used by a young Vincent Valentine. It is described as a "Standard Shinra Handgun". Unlike the Cerberus, this gun is modified to shoot only one bullet at a time.

The Cerberus is a firearm exclusive to Noctis. Unlike other firearms, it is a sniper rifle that allows for a third-person and first-person aiming mode, and is controlled directly by the player. When not aiming, Noctis will only shoot forward, albeit with a shotgun effect, and only deals half as much damage with a less effective breaking power. When holding the lock-on button, Noctis enters a third-person aiming mode, and can freely aim horizontally, as well as move around, dodge, or phase. Lastly, pressing the warp button while in third-person mode zooms into a first-person scope, allowing vertical aiming and increased precision, but has a smaller hitbox and leaves Noctis more vulnerable. While zoomed in, two different zooms can be toggled with the warp button. Zooming in is easier in Wait Mode, where the player can aim freely while the action is paused. The player can't scan enemies with the Cerberus, however.

While it can be used to break enemies from afar and salvage appendages from wildlife with its exceptionally powerful breaking power, the Cerberus is also useful against imperial and magitek infantry whose troopers are instantly defeated with a headshot. The player can destroy magitek armors' weapons, and when the MA-X models ready their magitek spear, the player can shoot at its center to cancel the attack and make the MA vulnerable.

It is possible to cancel the recovery time and fire at a faster rate by exiting and reentering the first-person mode between each shot. The rifle can also quickly fire a second shot in standard mode after exiting either first-person or zoom mode.

Due to its nature as a sniper rifle, the Cerberus uses a different control scheme from Noctis's other weapons. As a result, he cannot warp-strike, lock-on, or parry using the Cerberus. It has no aerial attack, phase counter, or delayed attack.

The weapon likely alludes to both Vincent's signature weapon, and the Cerberus creature from the Final Fantasy XV Universe.

Ardyn can wield a variation of the Cerberus sniper rifle known as Cerberus-0 that also enables a first-person aiming mode. Crownsguard and Royal Guard enemies can be eliminated in one hit with a headshot. He can drain MP to freeze time, increasing precision. The weapon is unaffected by Ardyn's accumulated daemonic energy.

The Cerberus weapon appears on cards.

One of Vincent's cards bears an ability named "Powered Cerberus". For the discard of another Vincent card and one Earth CP, Powered Cerberus makes Vincent Active and grants him +4,000 power until the end of the turn. 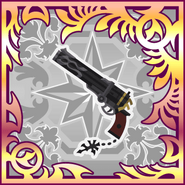 Artwork of the Cerberus.

Close-up of the Cerberus chain.
Add a photo to this gallery

Its incarnation as a firearm is a likely reference to the 2002 Yasuhiro Nightow video game and anime series, Gungrave. While Vincent's revolver likely draws upon Beyond The Grave's twin pistols, its appearance in Final Fantasy XV as an imperial sniper rifle likely refers to the lost centerpiece "main head" gun, Center Head, as wielded by the antagonist Fangoram.