Cerberus is also the name of a specific Notorious Monster encountered in Mount Zhayolm and Nyzul Isle.

The Cerberus is a giant three-headed beast. Extremely rare in Vana'diel, the first sighting of this beast was in Halvung, home of the Troll mercenaries. Highly aggressive, even being able to detect adventurers who are hidden under the Invisible status, Cerberus attack through their use of massive paws, flailing tail and toxic breath attacks. Almost all Cerberus attacks are fire-based, and they are most notorious for their devastating Gates of Hades attack, which scorches everyone around them and leaves them to suffer with burns.

All Cerberus in Final Fantasy XI are either Notorious Monsters or encountered only in battlefields.

Orthrus - Orthrus is a Cerberus variant first encountered in Abyssea. 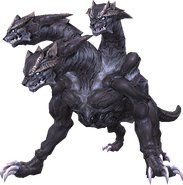 Concept art of a cerberus.