You cannot stop the flow of darkness!
This will be your final resting place!

Cerberus is a boss from Final Fantasy III. It is located in the final area of the game, the World of Darkness, at the northwest portal. Cerberus is one of the four guardians of the Dark Crystals the Cloud of Darkness orders to kill the Warriors of Light. It guards the Wind Crystal of the Dark World.

Can attack three times per turn. Physical attack can Poison.

Unlike other bosses in the game, Cerberus can attack three times each round, and each attack may inflict the Poison status. To avoid this, have Ribbons on all party members. Cerberus's attacks include Blizzaga, Thundaga, and Firaga that may inflict damage to the whole party. The extra action may also call for the Black Belt's Boost ability, the Ninja's Throw ability, strong physical attacks, and a couple Elixirs. After attacking for about eight turns, Cerberus will eventually die and the party will meet a Warrior of the Dark.

Since Cerberus can use powerful physical attacks, the best method to repel these attacks is equipping a Viking with two shields and having it constantly use Provoke to draw attacks towards it, therefore doing minimal damage. The Protect status should always be on the Viking, and it should be healed often so the party takes less damage. Another strategy is to have a Bard equipped with the Loki Harp and Sing to Haste the party and deal more damage every turn. If the effect still lingers, the Bard can use Antidotes on any poisoned members. 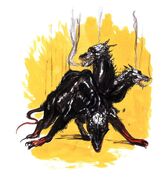