Prince of the kingdom of Baron, and son of King Cecil and Queen Rosa, the man and woman who once fought to save the world. The castle court has great expectations of him, but he has doubts about his own abilities.

Prince Ceodore Harvey is a playable character and the main protagonist of Final Fantasy IV: The After Years. Son of Cecil Harvey and Rosa Joanna Farrell, he is named after his uncle, Cecil's older brother, Theodor. He is one-quarter Lunarian, due to his father's half-Lunarian heritage. 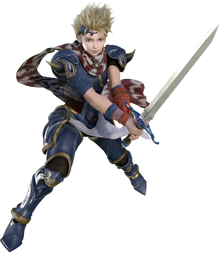 Ceodore has short, spiky blond hair (though his sprite has blue hair), and light blue eyes. He wears a blue suit of armor with a red and white scarf around his neck.

At the beginning when he sets out with Biggs and Wedge to earn his Proof of Knighthood, Ceodore is a young boy who has no confidence in himself, his abilities or his family bloodlines, despite Wedge's unending faith in him. He considers himself nothing but a common soldier and remains so until his fight with the Sand Worm, where Ceodore reveals a brave and determined side to himself due to a strong urge to be an individual, and carve his own path rather than follow in his father's footsteps like everyone expects him to. Ceodore cares deeply for both Biggs and Wedge, and during his and Kain Highwind's battles to save Baron, Ceodore shows courage and resolve, and ultimately, through the support of Biggs and Wedge, learns to take pride in both himself and his parents, while remaining an independent and strong young man.

Kain tells Cecil that Ceodore has talent and is every bit as earnest as Cecil is, but mentions his stubborn streak must come from Rosa.

Ceodore is being tested to become a knight and he is accompanied by Biggs and Wedge, commanders of the Red Wings fleet. Ceodore's test is to venture into the Adamant Isle Grotto cave near Mythril and retrieve a Knight's Emblem from its depths. A Sand Worm attacks him, and Ceodore unlocks his hidden potential in the form of his Awaken ability, giving him the strength to defeat the worm.

On the flight back to Baron, the Red Wings are attacked by monsters and crash pushing the airship past the safety limit trying to return to Baron. Ceodore is the only survivor thanks to Biggs shielding him, and he receives Biggs's dying orders to return to Baron. Attacked by another monster, he is rescued by a Hooded Man who is also seeking to go to Baron. The two travel to Mysidia and meet with Porom, who sends them through the Devil's Road with a Black Mage and White Mage. At Baron Ceodore is denied entry to the Baron Castle, the mind-controlled guards not recognizing him, so the group sneaks in through the Ancient Waterway. Ceodore searches the castle but finds it empty, and the Hooded Man, having found Cecil and not wishing Ceodore to see him possessed, tells them they must flee Baron.

The two travel through the Mist Cave where the Hooded Man reveals he is searching for Kain Highwind. The two scale the Mist Cliff and at the summit see the Red Wings flying north, and wonder if they're on their way to attack Damcyan. They journey through the desert, stopping at Kaipo to rest before traveling through the Underground Waterway to Damcyan. They arrive to see the Red Wings, commanded by Kain, lifting off from Damcyan with Rosa and Damcyan's Crystal in his possession. Ceodore and the Hooded Man board the Enterprise with Edward and Cid and pursue them. At Baron Castle the Hooded Man reveals he is the true Kain, and the Kain who has abducted Rosa and taken the Crystals is his incarnate inner darkness. Kain defeats his dark half and rejoins with it, and for his trials is transformed into a Holy Dragoon by the spirit of Kluya.

If Golbez survived the battle with the Dark Knight, he leaves the planet in the Lunar Whale to find the Red Moon, and Ceodore tells him they will meet again someday. Ceodore spars with Cecil before Kain, now the commander of the Red Wings, retrieves him for a mission to help with the reconstruction of the world.

Ceodore's HP and Strength are mediocre compared to the other physical characters, but he has higher MP and Spirit. The primary advantage of Ceodore compared to other healers is his significantly higher Speed, having 51 Speed at level 99, while Rosa, Porom and Leonora have Speed in their 30s.

When using Awaken, Ceodore is fully healed and his stats are boosted, but when it wears off Ceodore's HP is reduced to single digits.

Ceodore has abilities similar to that of a Paladin, being a physical attacker able to cast White Magic. Compared to his father, Ceodore has greater emphasis on his spells while not being as good a fighter. He has a variety of White Magic that grant status effects and heal party members. While he is not as effective as a dedicated White Mage like his mother, Ceodore's magic is still strong.

His ability is Awaken that fully heals Ceodore and increases his stats for several turns, but when it wears off Ceodore's HP is reduced to single digits.

Ceodore has a variety of Band abilities and can fit into several party configurations. His damaging Bands benefit from his Awakening ability to increase their damage, and he has several two-person Bands that execute quickly and do heavy damage.

A good endgame strategy for Ceodore is to pair him up with his father: when Ceodore's HP is reduced after using Awaken, Cecil will automatically use Cover on him, giving him enough time to heal himself and continue fighting.

Ceodore begins with a Broadsword, a Bronze Shield and a Bronze Armor.

This section about a character in Dissdia Final Fantasy Opera Omnia is empty or needs to be expanded. You can help the Final Fantasy Wiki by expanding it.

Ceodore is a playable character who could initially be recruited during the Challenge Event Last of the Red Wings. He was a First Time Reward for completing the event's Toward Mysidia stage on Classic difficulty.

Ceodore's artwork was altered for the game's American version, as were a few other characters' artworks. It has a less manga-ish face and looks more "polished" overall. In Final Fantasy IV: The Complete Collection, his artwork reverts to the original Japanese version.

Ceodore was seventeen in the original version of Final Fantasy IV: The After Years. The Complete Collection retconned his age to fifteen, most likely to remove the previous age's implication of Rosa being pregnant during the ending of Final Fantasy IV. 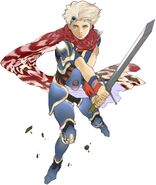 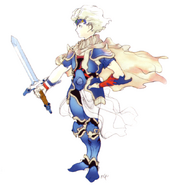 Concept artwork of Ceodore with Rosa, Cecil, the Hooded Man, and Golbez.

Illustration of Cecil, Rosa, and Ceodore (from top to bottom) for The After Years, by Yoshitaka Amano.

The cover to the The After novel, featuring Ceodore with his parents.

Ceodore in the opening FMV from The Complete Collection.

An FMV featuring Ceodore during his infancy from Final Fantasy IV Complete Collection.

Ceodore in an FMV (iOS).

The name Ceodore is likely a portmanteau of the names Cecil and Theodor (his uncle's real name).

The Japanese language does not have a "th" sound and instead uses "s" in transliterations. This means that Ceodore, Cecil, and Theodor's names each start with se (セ?). Because Theodor's name is never written in roman lettering in the games' Japanese versions, an intended portmanteau would not be obvious to players.

[view · edit · purge]"Harvey" is from the Breton given name Haerviu, which meant "battle worthy" from Breton haer "battle" and viu "worthy". The name was introduced to England by Breton settlers after the Norman Conquest.