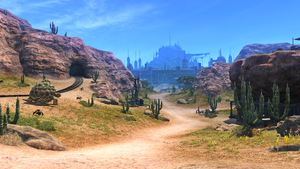 The main gate of Ul'dah opens up to the desolate wastes that comprise central Thanalan. Caravans laden with goods can be seen passing through the area, as can tired refugees lacking even their daily bread. This is a place that strikes a stark contrast between those who have naught, and those who want for naught.

Central Thanalan is a location in Final Fantasy XIV in the Thanalan region. It largely serves as one of the starting zones for players beginning in Ul'dah.

The only Aetheryte is located at Black Brush Station, in the upper center of the map.

A marvel of modern innovation, the steam engine has transformed the mining industry, increasing efficiency and profits thrice over. It has also led to the transformation of what was once a thinly manned aetheryte outpost into a thriving crossroads of labor and commerce—a new pillar to support the thriving Ul'dahn economy.

Originally a basic aetheryte camp, the construction of a rail line for transporting mining results gave it a new form and function.

Central Thanalan's climate may exhibit any of the following weather conditions:

The southernmost station of Ul'dah's rail line, located next to the Royal Plantations.

The site of the ruins of Sil'dih, destroyed in a bitter feud with its sister nation of Ul'dah.

A tavern just south of Black Brush Station. Triple Triad can be played at this establishment.

A small enclave of Mutamix Bubblypots and his followers, the foremost researchers of Materia.

It is the only place where Materia transmutation can be done. By talking to Mutamix, players can transmute 5 Materias into one, though this is a complete random process, so the result can be a better Materia or a worst one.

The former estate of a member of the Syndicate who perished during the Calamity. Now home to Lalafellin bandits.

The theme that plays in settlements is titled The Gift Of Life.