Able to call your party members from long distance.

A cellphone, also called PHS, handset, COMM, or phone or smartphone, is a mobile electronic device used to make telephone calls across a wide geographic area. It first appeared in the Compilation of Final Fantasy VII where, in terms of function and appearance, a PHS is the same as mobile phones in the real world.

Introduced in Final Fantasy VII as the PHS, the phones are used by the player party to communicate and this continued over to other games in the Compilation. Long distance communication devices have since appeared in various games, more often in the ones featuring technologically advanced civilizations. Final Fantasy XV has smartphones akin to those available in the real world, which the party uses to play a mobile game during down time and to make phone calls. Other games have more fantastical personal communicator devices, such as the linkpearls of Final Fantasy XIV.

"PHS" is the means of switching party members at save points and on the world map. Cloud receives it in Kalm from his allies after they escape Midgar. Barret temporarily holds it in Lower Junon so it does not get waterlogged when Cloud has to swim. Later on, if Cait Sith is not in the party at the Temple of the Ancients, and during the second visit to the Forgotten City, he will contact Cloud via the PHS to inform him of his plan to get the Black Materia, and alert the party of the Sister Ray cannon's transfer from Junon to Midgar, respectively.

A PHS, or Personal Handy-phone System, is a type of mobile phone system that was common in Japan at the time of the development of Final Fantasy VII. In the game, PHS stands for "Party Henshu (Editing) System" (パーティ編成システム, Pāti Hensei Shisutemu?)[1][2].

The most prominently featured phone is the Panasonic FOMA P900iV product placement, which helped market both the movie and the phone. In Advent Children Complete, it is shown that the background of Cloud's cellphone has the Fenrir emblem watermarked behind the menu.

All main characters own a phone (except Cait Sith, Red XIII who has one stolen by Yuffie in "Episode: Yuffie", and Vincent Valentine who later buys one after Marlene comments on how he doesn't have one), including Rufus Shinra, the Turks and the antagonists, Yazoo, Loz and Kadaj. Cloud's phone features the most prominently, having become a symbol of his isolation and depression. Cloud no longer answers his calls, forcing callers to leave voice messages, and he rarely, if ever, calls them back. Tifa scolds Cloud for isolating himself using the phone as an example, saying "you don't answer the phone, but I don't see you throwing it away either". During Cloud's scuffle against the three Remnants of Sephiroth at the Forgotten City, he accidentally drops his phone in the lake. When the phone sinks to the lake bottom, Aerith leaves a message on it before it deactivates.

When Vincent enters the battle against Bahamut SIN he asks Tifa where the cellphone store is, as he needs one. Shortly after the events of the movie, as chronicled in Reminiscence of Final Fantasy VII, Vincent acquires a phone, revealed in Dirge of Cerberus -Final Fantasy VII- to sport his trademark design. He calls Cloud to pass on a message to Yuffie Kisaragi to tell her she has no right to call him. Most of the dialogue in Reminiscence are phone conversations, as none of the characters are seen outside of the Final Fantasy VII montages.

Loz's ringtone is the beginning snippet of the Final Fantasy VII "Victory Fanfare", as it rings shortly after Tifa narrowly "defeats" him in Aerith's church before he gets back up and answers it.

Part of standard Turk equipment, the player Turks use their cellphones to receive orders from Verdot or Tseng and keep in contact with their superiors and each other. With the phones they can report emergency information or be given on-the-spot instructions.

Vincent has acquired a phone, though it is thought to be destroyed during the attack on Edge. Cloud has gained a new phone to replace the one he lost in Advent Children, identical to his original.

Despite taking place before the original game, the phones featured are the same models as those of Advent Children and Dirge of Cerberus. Zack periodically receives e-mail from numerous contacts, as well as calls.

"Handsets" are a standard issue among SOLDIER members. Angeal Hewley, Zack, and Sephiroth use them, and Kunsel gives Zack a crash course on how to use his. It can be assumed that the menu (or at least, the missions menu) is what Zack reviews on his cellphone screen, as Angeal accesses his phone in that way to abort a training session in the Virtual Reality System room. The phones appear have a limited but effective worldwide network communication interfacing system, allowing Zack online remote access to businesses to purchase or sell items.

Shinra personnel have smartphones, and Heidegger keeps in touch with his higher ups with one while covertly observing Avalanche operations.

In the Drum in the Shinra Building, the party uses "PHS" machines modeled after the PHS system from the original game

; their gameplay purpose is to switch between playable parties.

Linkshells are central to the adventuring communities of Vana'diel. Players use the command "/linkshell" or press "CTRL + L" to transmit chat messages to their peers. Though only one linkshell can be active at a time, adventurers may carry as many shells, pearls, and sacks as there are spaces in their inventories.

Airships can communicate between each other, the only direct long-distance communication apparatus shown in Ivalice. Balthier has a speaker that changes the speaker's voice to that of another. He uses it to mimic Ashe when she tries to steal the Strahl and Vaan later uses it to mimic Larsa to have Ondore let them through. All airships can communicate among each other, even the Archadian Imperial Fleets with the Resistance. Balthier can also communicate with the Strahl from inside the Sky Fortress Bahamut.

How this technology works is unknown, but technology in Ivalice tends to use magicite rather than real world computer technology.

In Palumpolum, Lightning and Fang contact Snow and Hope via a communicator to agree to a rendezvous point. Hope asks to talk to Lightning and says he is going through with his plan of revenge despite Lightning's objections, then discards the communicator so Lightning can't contact him again. The two groups later find each other and head for Hope's home together.

Lightning and Hope keep in contact via a wireless communicator, albeit the exact way the system works is never shown. The only place where Hope cannot listen in on Lightning's doings is when Lumina pulls her into a metaphysical location apparently existing inside Lightning's own heart.

There were plans to have Lightning talk to her friends on a smartphone for the epilogue, but instead it was decided to leave ambiguous as to where she is heading, and who she is going to meet.[3]

Linkpearls are magical devices that people use to communicate.

Since version 4.4, an Allagan tomestone device, shaped like a smartphone, can be used by the players who registered their account with the Final Fantasy XIV Companion app. 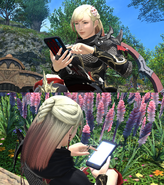 The people of Lucis use smartphones. Prince Noctis's model, called Crown City Smartphone in the inventory, is said to be made for the Crownsguard's use. He uses is to keep in communication with various people, and is sometimes seen playing a mobile game King's Knight on it during rest times. Some of the random field banter is also about the mobile game. Sometimes he gets calls concerning quests at the start of a day after resting. Posters seen throughout Insomnia advertise a model of smartphone known as the "Libra."

In the Platinum Demo – Final Fantasy XV the young Noctis communicates with a Carbuncle using a smartphone that the Messenger gives him. This method of communication remains in the full game's tutorial and during Moogle Chocobo Carnival, albeit using Noctis' own smartphone.

In Close Encounter of the Terra Kind collaboration event the Hiso Alien children steal Noctis's phone, but Sarah gets it back.

In Final Fantasy XV Episode Duscae the party uses their phones as alarm clock and to take photos in the tours. In the final game, the party only uses cameras for pictures and are never seen using an alarm clock function.

In the Adventurer from Another World quest Y'jhimei gives Noctis a device to keep in wireless communication with one another, a linkpearl from Eorzea, but it doesn't have a model, Noctis appearing to talk to his fist when using it.

Noctis speaks to Cor on the phone.

Carbuncle brings Noctis a smartphone in the Platinum Demo.

Noctis communicates with Carbuncle via a smartphone.

The "invisible" communicator in Adventurer from Another World.

"Crystal Oriented Messaging Medium" (COMM) is the communication device used by the cadets of Akademeia. This is how Mog and other support personnel keep in contact with cadets while on the field. In the novel, the COMM is described as a small white spherical device no more than 2cm in diameter.

This section about equipment in Final Fantasy Record Keeper is empty or needs to be expanded. You can help the Final Fantasy Wiki by expanding it.
Spoiler warning: Plot and/or ending details follow. (Skip section)

During Capital Liberation Izana Kunagiri is deployed to deliver a COMM to Ace, as Class Zero's involvement in the defense effort was top secret until the last minute, and it suddenly became pertinent to link the cadets to the operation HQ. While the cadets are ambushed in Ingram, they find that the COMM is not working. They escape the city to a deserted house in old Lorican region, where they are worried the COMM is still not responding even if it appears to be working. Cinque points out that the Vermilion Bird Crystal that powers the COMM must be unharmed, seeing that Rem Tokimiya, a cadet in their class who relies on the Crystal to wield magic, still has her powers. Eight speculates that some kind of "jammer" is in place to stop their communications. In the morning, Deuce exclaims the COMM is working again and that she has reached the dominion. When the cadets get back, they learn they are being accused for having disabled their own COMM to prevent communications.

Noctis picks up his smartphone and speaks with Lars Alexandersson in the DLC trailer.

Concept art of Vincent Valentine's cellphone in Dirge of Cerberus.

Concept art of Shelke's cellphone in Dirge of Cerberus.

Tifa's cellphone in Dirge of Cerberus.

Vincent's cellphone in Dirge of Cerberus.

Vincent's cellphone in Dirge of Cerberus.

Lightning on the phone in Final Fantasy XIII.

Noctis speaking on his smartphone in Tekken 7.