An imperial Magitek Knight who was once one of the Empire's top generals. She objected to the barbaric methods the empire had adopted, for which she was branded a traitor and sentenced to death, before being saved by Locke.

Celes is a playable character in Final Fantasy Record Keeper. She was first recruited after collecting 8,000 Memory Prisms during the Survival Event Magitek Facility Infiltration. She could be re-recruited the Challenge Event Back to the Skies as the First Time Reward for completing the event's stage Magitek Factory in Part 1. She was also available in Sketching Miracles and Prima Donna.

She strikes a solid balance between her physical and magical stats, has a good Speed stat boasts one of the highest Resistance scores. She is a well-rounded frontline fighter who has mastered the Spellblade arts as no other unit can—or does. The player can put her skills to work against Reflect-happy foes, such as Baigan. As a Rune Knight, two of Celes's Soul Breaks draw magic toward herself and absorb it, making her indispensable against wizardly foes.

Japanese event banner for "Back to the Skies".

Global event banner for "Back to the Skies". 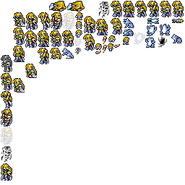