Akira Oguro
Cecilia is a non-player character in Final Fantasy IV. While she is never seen nor mentioned in the initial releases, the Nintendo DS remake lets the player see her for the first time.

Cecilia is a woman with blonde hair with a low ponytail and blue eyes. She wears a long beige and purple robe with blue details.

Cecilia was a human woman and the wife of the Lunarian, Kluya. She gave birth to two sons; Theodor, who later became Golbez, and Cecil Harvey. Almost immediately after Kluya was killed by angry humans, Cecilia died giving birth to Cecil.

Golbez, who was being controlled by Zemus, abandoned his brother outside Baron. The King of Baron found Cecil and gave him his name, as he closely resembled Cecilia. The scene hints that the King once closely knew Cecilia, and that she was sent away from Baron due to his own cowardice, but it is never further elaborated on. 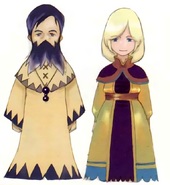 Concept art of Kluya and Cecilia from the developer's blog (DS).

[view · edit · purge]"Cecil" is a unisex name, derived from the elements caecus, meaning blind, and sextus, meaning sixth. Caecilius (Latin), Seissylt (Welsh), and Sextilius (Latin) are original forms of Cecil. In the medieval period, Cecil was sometimes used as an English form of the Latin Caecilius. The third century Saint Caecilius converted Saint Cyprian, who subsequently adopted Caecilius as an additional name. The name Cecilia is the female form of Cecil.