As one of the most iconic characters in the Final Fantasy IV saga, and in the series as a whole, Cecil Harvey has made more than a dozen appearances in series works and in other games as a representative of the franchise. The following is a list of Cecil's appearances outside Final Fantasy IV canon.

Cecil's Dark Knight armor, Paladin circlet and earrings is available in the Heavensward expansion for those who own the Collector's Edition. 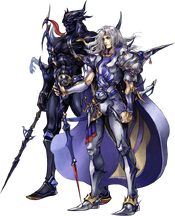 Cecil appears as a Warrior of Cosmos and stands as the hero representing Final Fantasy IV, opposing Golbez.

As one of two Warriors of Cosmos related to a villain by blood, Cecil is torn between his feelings for Golbez as a brother and as an enemy. Golbez offers him cryptic advice, which makes Cecil doubt his chosen path. The trials Golbez gives to Cecil reveal his true motivations and desires, which strengthen his resolve to confront his dark brother and reclaim his Crystal.

Cecil's alternate outfit is a palette swap based on his artwork by Yoshitaka Amano, recoloring his armor with red details and giving him an orange cape as a Paladin.

Cecil plays a small role in the plot, but is an influence on the decisions of Golbez and Kain. Golbez tells Kain about the cycles of war and that they recover their memories as they fight, which is why Cecil, being summoned to fight more recently than Golbez or Kain, cannot remember him. When Cecil confirms he cannot remember much of his home or his connection to Golbez, Kain realizes Golbez has told the truth, and the epiphany motivates Kain's actions for the rest of the storyline.

Cecil's second alternate outfit is based on his appearance in the FMVs of the 3D release of Final Fantasy IV, giving him lighter Dark Knight armor and silvery Paladin armor, both with symmetrical designs. As a bonus fourth outfit available with the purchase of Final Fantasy IV: The Complete Collection, Cecil takes on his sprite appearances with aspects of his super-deformed designs, giving him dark blue Dark Knight armor and gold and blue Paladin armor with spiked purple hair and a red cape.

Cecil is a playable character and a representative of Final Fantasy IV. He is classed as a Heavy-type character.

Cecil appears as an obtainable character.

A young man tasked with the great honor of commanding the Red Wings, the airship fleet which is the pride of the great military state of Baron. His earnest and gentle heart leads him to doubt the unreasonable orders of a king who demands unjust invasions and reaps destruction across the land. In the end, he must stand against his motherland and embark on a search for the truth.

Cecil is a default playable character, and his main attire is his Paladin form. Despite using the Dark ability, Cecil cannot change into a Dark Knight during battle.

Cecil lacks the natural strength of other warriors to prioritize Defense, and possesses several black magic spells along with the option to make use of the Dark ability. However, his magic is lower compared to other magic users, and equipping Dark can come at the cost of receiving more damage. Regardless, Cecil strength lies in his abilities to defend the party; he has the second highest HP and can bypass the decrement of Dark if the player is good at rhythm sequences.

When a Lunarian of legend threatens his world, Cecil disbelieves that he can defeat such evil as a dark knight and turns aside from his shadowed past. As a paladin, he will fight, grieve, and risk all for the planet...

Cecil is a default playable character. If the player did not select him among their party of four, he can later be unlocked by collecting Green Crystal Shards.

Cecil gains access to Focus, enabling him to take advantage of his Dark abilities that turns him into an offensive powerhouse. However, Cecil still prioritizes defense regardless, as his protective abilities have increased, in keeping with his role to balance out both his Dark Knight and Paladin jobs.

Cecil is one of the 28 default playable characters. His limit, Soul Shift, deals damage to boss-type enemies in direct proportion to Strength and Magic.

Captain of the Red Wings, Baron's airship fleet. Was once an elite Dark Knight, but became a Paladin after finding himself caught between King Baron's unreasonable orders and his own sense of justice.

Cecil appears as a Legend and can use his Luminous Shard ability.

This captain of the Red Wings has some issues with the King of Baron's authority.

Dark Knight Cecil is an exclusive character available from the Premium Character Shop as a random downloadable content, he uses the Souleater during battle.

Cecil appears twice as a recruitable character. Dark Knight Cecil and Paladin Cecil are considered to be separate units with different roles and separate sets of equipment and skills available to each; and both may be in the party simultaneously. Both characters were obtained from separate stages within the Light Against the Darkness Challenge Event. Cecil as a Dark Knight also appears as a boss. 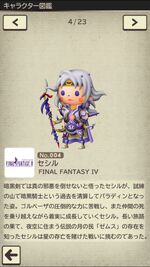 Cecil appears as a vision and optional playable character. He is available in two variants: the 3-6★ "Cecil" (セシル, Seshiru?) based on his Paladin appearance, while the second variant is based on his Dark Knight look, a 5-7★ unit aptly named "Dark Knight Cecil" (暗黒騎士セシル, Ankoku Kishi Seshiru?), available since the event The Giant of Babel. While "Cecil" focuses on the roles Tanking and Support, "Dark Knight Cecil" focuses on dealing dark-elemental Physical Damage.

Cecil appears as a summonable Champion.

Notes: Paladin / On a quest to save someone dear to him / Hails from the legendary land of Baron

Search for the Night Queen
Cecil is a traveller who possesses a noble aura and is highly attuned to the energy of the moon. He is on a quest to find a desert flower called the Night Queen, which he need to cure his comrade of sunstroke. Though usually calm and collected, Cecil becomes agitated and reckless when a person named Rosa is involved. His care and concern for Rosa leads him to rush back to her after finding the Night Queen, but the sunstroke victim she has been caring for may have actually preferred for him to take his time...

Cecil appears as an opponent and on Triple Triad cards in the version available via the Final Fantasy Portal App. On Easy he uses the rule Three Open. On Normal he plays with Same and Swap. On Hard he uses Plus and Chaos, and the rare five star cards of himself can be won from him, among others. He uses the trading rule One.

Cecil makes an appearance in Ebon Keep. here Cecil runs both the armor shop and the inn, and sells powerful medieval-themed equipment he also claims to have acquired on his adventures, although none of them are items that appear in Final Fantasy IV.

When first met, Cecil asks the protagonist if he's heard of him, and alludes to the events of Final Fantasy IV to remind him—the player can choose to remember Cecil or not, and will receive a discount at his shop if they do. Cecil mentions he is still married to Rosa, although she does not appear in person, and gives the player the Bazooka weapon he found on a cliff. The music that plays in Ebon Keep is titled "City of Ebony". 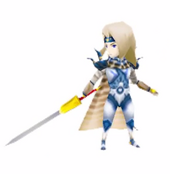 Cecil appeared as part of the Final Fantasy collaboration event that began on March 21, 2016.

This section about a character in Puzzle & Dragons is empty or needs to be expanded. You can help the Final Fantasy Wiki by expanding it.

Cecil appears as part of the 2018 Final Fantasy collaboration.