Cecil's default player name is Nameless Knight, and his manikin counterpart has been renamed Flickering Knight.

Cecil's default costume is the "Red Wings of Baron", more lustrous versions of both his Dark Knight and Paladin forms from the PlayStation Portable Dissidia games, which in turn were based on the Yoshitaka Amano designs. The first alternate coloration resembles the "Knight of the Red Moon" attire from Dissidia 012 Final Fantasy. The third alternate coloration combines elements of both forms: Cecil's Dark Knight form has darker armor with cyan and golden elements, while his Paladin form features a gray cape and brown accents on his armor. 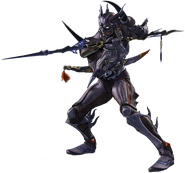 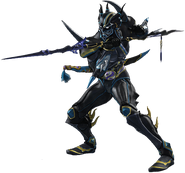 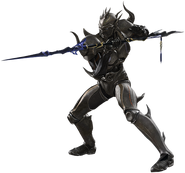 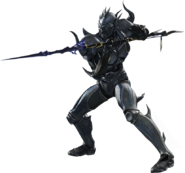 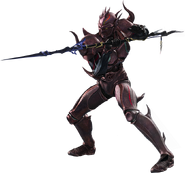 Cecil retains his memories of his homeworld and the previous cycles, thus appearing more confident than in previous Dissidia games. Cecil does not mindlessly heed Materia's orders and questions her motives. He sympathizes with Noctis's wish be returned home to his friends, and explains the Warrior of Light's motivation to assist Materia to help Noctis understand his personality. 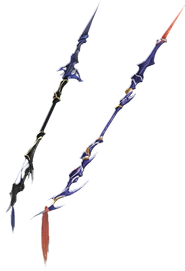 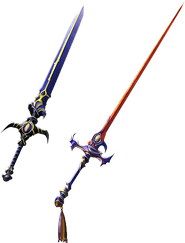 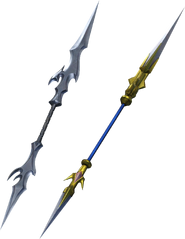 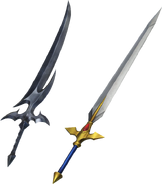 Cecil's Waning Blade and Waxing Blade.
Add a photo to this gallery

Cecil is summoned as a warrior of Materia to fight in the new war. Shortly after his arrival in World B, Cecil happily reunites Firion and Zidane. At Materia's tower, Cecil and the other champions learn that they must fight each other to produce enough energy to sustain this world. After their meeting is interrupted by Spiritus, Materia orders her champions to fight his forces.

Although skeptical of Materia's motives, Cecil, Warrior of Light and Noctis lend their aid to Materia's cause for the time being, and set out to confront Spiritus. Along the way, Cecil and Noctis share their concerns about the fates of their allies in their respective homeworlds. The Warrior of Light, overhearing their conversation, shares that he also has a home to return to, but would have chosen to answer Materia's call regardless. Cecil explains to Noctis that while the Warrior of Light does not understand Materia, her fight is still important to him.

As they pass through a portal to cross a chasm, the three witness a planesgorger feeding on a crystal formed from the energy of battle, and begin to wonder whether Spiritus is their true enemy. Cecil and the Warrior of Light dissuade Noctis from fighting the dragon in favor of proceeding to Spiritus's domain. Arriving on an illusion based on Cornelia, the Warrior of Light reminisces about his adventures, and the three are confronted by Garland and two manikins. Cecil holds Noctis back while the Warrior of Light faces his old nemesis, but they join the battle at the Warrior of Light's behest.

After Garland explains that Spiritus does not seek World B's destruction, Cecil suggests they return to Materia to appraise her. Noctis proposes they ask Spiritus's help to relay their message through the communication channel the gods used before, and the four continue onward. Cecil commends Noctis on his quick thinking, who insists that he calls him "Noct". As they arrive at Spiritus's tower, Shantotto initiates the conversation from Materia's side, and Noctis and the others inform her and Spiritus of the planesgorgers.

After the two gods form a truce, the champions on both sides engage in a staged battle to lure Shinryu to them. Cecil stops Kuja from ambushing Tidus and Vaan during their battle against Kefka. As Shinryu arrives Cecil participates in a joint attack against the dragon, but they are repelled when Shinryu reveals his true form in a potent burst of power. After regaining their composure, the warriors work together to defeat Shinryu. The moogles give Cecil a crystal to host his memories for Materia to use in the new cycles of wars. With a crystal doppelgänger to serve on Materia's behalf, Cecil is sent home.

Type: Vanguard - Cecil fights by switching between two jobs as the situation demands, dominating up close in the air as a Paladin or far away on the ground as a Dark Knight.
EX Skill: Job Change - Switches from Paladin to Dark Knight or vice versa, and receives a buff that boosts attack potency and defense. 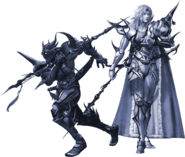 Noctis being introduced into the cycles of war by Warrior Of Light and Cecil. 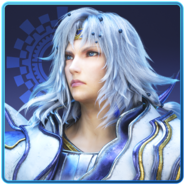 Cecil alongside the other 14 main characters.
Add a photo to this gallery