A kind-hearted knight wielding both the powers of light and darkness, he prizes the bonds with his allies that at times are the cause of his doubts.

A kind-hearted knight that wields the accursed power of darkness.

Cecil Harvey is a warrior of Cosmos in Dissidia Final Fantasy and Dissidia 012. He relies on experience as both a Dark Knight and a Paladin, and may freely switch between them during battle. When a Dark Knight, he is a formidable ground fighter, boasting short and long range moves. As a Paladin, aerial combat is his forte, combining speed with expert swordplay. While traveling alongside Firion, Cloud, and Tidus, Cecil deals with his feelings for Golbez, torn between fighting him as his nemesis and trusting him as his brother.

Cecil's outfits are based on Yoshitaka Amano's designs. As a Dark Knight, he is clad in a suit of black armor with indigo and gold linings, completed with a spiked helmet. As a Paladin, his physical appearance is revealed, having fair skin and white hair with beads. He wears a suit of white armor with blue linings and a flowing blueish/purplish cape. He wields lance-like swords based on Amano's ( 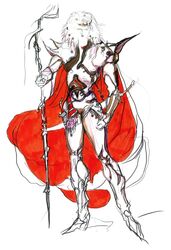 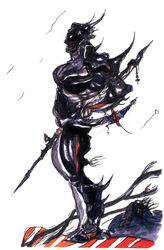 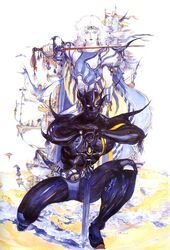 Cecil's first alternate outfit, "Knight of the Red Moon", recolors his armor to reflect a supplemental drawing by Amano (

). His Dark Knight armor is a lighter black with red accents, and his Paladin vestiges have silver and red highlights with an orange cape. To keep in-line with the color scheme, his dark swords are black and red, while his Paladin swords are silver and blue.

Cecil's second costume, "Knight of the Silver Moon", is his appearance from the opening FMV of the Final Fantasy IV 3D remake. His Dark Knight form ( 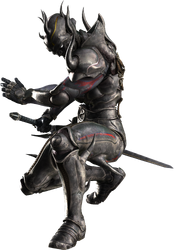 ) dons a different helmet with dark gray armor adorned in red and silver highlights. As a Paladin ( 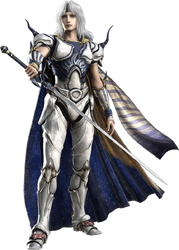 ) Cecil's hair is straight combed, whereas his armor has more silver accents and a different cape. Both forms have different shoulder plates and symmetrical spikes. His base swords reflect the new color scheme, while his EX Mode weapons take on their designs from the remake's FMV.

Available as a downloadable bonus costume by purchasing Final Fantasy IV: The Complete Collection, "Knight of the Twin Moon" is based on Cecil's super-deformed ( 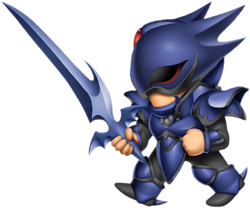 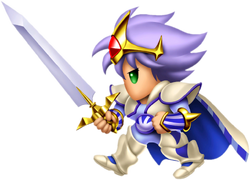 ), while incorporating aspects from his Final Fantasy IV sprites. When a Dark Knight, he has a more streamlined suit of dark blue armor, and his helmet has a red gem on the forehead and exposes his mouth. His Paladin form wears gold and blue armor and has a white cape with a red lining. His hair is purple, shorter and spiked, he wears a gold headpiece, and has green eyes instead of purple. His EX Mode weapons are based on the SD art, and his normal swords have streamlined features with color schemes matching the EX Mode weapons.

Cecil's crystal may allude to his own duality or the Crystals from Final Fantasy IV; it is half white and half black, possibly referring to the Light and Dark Crystals.

Cecil's manikin, Delusory Knight, is dark blue as a Dark Knight and silver when in Paladin form.

It's because I have friends that I can fight! Both light and darkness give me the guidance I need. Thus—I can turn darkness into hallowed light!

Much like his depiction in Final Fantasy IV, Cecil is a kind, honest, loyal, and noble knight, strong-willed and firm in his beliefs. He cherishes the bonds with his companions—especially Tidus, Firion, and Cloud, whom he travels with—and believes that fighting together is the way to success. Due to Cecil's gentle and compassionate demeanor, the other warriors of Cosmos often confide in him whenever they are troubled, and thus Cecil acts like an older brother-like figure to his allies.

Cecil encourages Cloud to separate from their group to seek answers when the latter becomes distraught with his purpose in the conflict, and comforts Terra when she becomes scared of her future after they defeat Chaos. When Onion Knight becomes upset with the Warrior of Light's calm disposition after Cosmos's death, Cecil helps him understand the latter's character better and how "a true knight is defined by that which he protects."

In the thirteenth cycle, Cecil strives to find his crystal by working together with his companions. He begins to doubt his abilities and self-worth, which only worsens upon hearing Golbez's advice of how the "crystal shines upon those who exhibit the strongest will." Cecil begins to question his friendship with his allies after Golbez and Cosmos lecture him on depending too much on his companions' strength rather than his own. Cecil overcomes his doubts when he realizes he travels with his companions not to cover up his own weakness, but to provide them with encouragement and support as they do with him.

Similar to Tidus, Cecil has a complicated relationship with his relative, Golbez. Having recovered most of his memories from his homeworld, Cecil continues to love his brother and believes in him. When Exdeath tries to eliminate Golbez for his treachery, Cecil rushes to his brother's aid. However, due to Golbez's affiliation with Chaos, Cecil understands that Golbez is his enemy and hesitates to trust his advice. Although Golbez sees himself as irredeemable and rejects Cecil's attempts to persuade him to join the warriors of Cosmos, Cecil hopes that the two of them will be together someday, as he sees their familial bond as "[his] guiding light."

In Dissidia 012 Final Fantasy, Cecil shows an inclination for romance. When Firion loses his wild rose and tries to work up the courage to ask Lightning for it back, Cecil misinterprets Firion's intentions for a romantic interest and calls Lightning to them to get the two to talk. In the thirteenth cycle, Cecil misinterprets Onion Knight's desire to protect Terra for romance, claiming that he has "fallen for her," much to Onion Knight's embarrassment.

During a secret meeting, Golbez tells Kain the summoned warriors have no memories of their homeworlds, especially those closest to them. Cecil proves this by trying to protect Kain from Golbez, recalling Kain is his friend, but having no memories of Golbez as his brother. Cecil also unknowingly confirms Golbez's words to Kain about the war's cycle of death and rebirth by mentioning how more of his memories have returned as he fights.

In the Crystal World, Cecil notices a depressed Firion, who resigns himself to forgetting about his wild rose that Lightning had unwittingly picked up. Cecil misinterprets Firion staring at Lightning as a sign of romantic interest, and calls her over. Firion attempts to establish privacy between the two, but he runs off due to Cecil's misunderstanding of the situation, much to the two's confusion.

Later on, Cecil is knocked out by Kain to protect him for the next conflict. Cecil isn't seen for the rest of the cycle until his purification by Shinryu.

As the final cycle begins, Cecil joins Firion, Cloud, and Tidus. When Cloud asks why he is fighting, Cecil says he never considered, and Cloud later confides in him about Firion's reasons. Cecil says the wild rose symbolizes peace to Firion.

Golbez frequently advises his younger brother on seeking his crystal. Although Golbez is the enemy, Cecil wonders if he can trust him. He leaves with encouragement from Tidus and meets with Golbez until Exdeath attacks them for Golbez's treason, with Cecil emerging victorious. Golbez refuses Cecil's offer to join him, saying he's beyond redemption. Cecil visits Cosmos, who confirms Golbez's word that a strong will and strength of heart uncovers the crystals. Cecil and Golbez soon duel again, with Cecil's crystal materializing upon victory. Cecil claims he and Golbez made it shine together, while Golbez denies this and says it was Cecil's success, which he had been trying to tell him all along.

Cecil meets Golbez, who claims that in a world full of disorder his wish can be fulfilled. After Cecil triumphs over him, Golbez says he only wanted to test Cecil's bond with his friends to see if he could overcome Chaos. After claiming the bonds are strong and that the warriors of Cosmos are capable of anything, Golbez departs, saying he has no right to be near Cecil. Cecil offers Golbez to join them, stating their bond should allow them to fight together. Golbez tells Cecil he is far too kind to be a knight, but says they might fight at each other's side once the light shines on him.

Cecil gathers with the the warriors of Cosmos to defeat Chaos, and afterward find themselves in World A where Cecil watches everyone return to their homeworlds. Before departing for his own, Cecil tells his comrades he will pass on the strength they have given him.

"Cecil's Quest 012: A Re-encounter With a Close Friend" concerns Cecil attempting to liberate a gateway with Vaan when Vaan's mention of airships sparks a memory. Cecil seeks out Kain to tell him he remembers him, and that they serve in Baron's military together. The two spar and Cecil is frustrated over his other memories still being clouded, but Kain assures him he'll remember more in time.

"Cecil's Quest 013: Even I Don't Remember It" deals with Cecil's actions after claiming his crystal in the thirteenth cycle. He meets up with Cloud, Terra, Tidus and the Onion Knight, and the five travel together until Kuja appears to alert them that Firion is on his way to confront the Emperor alone. Terra fights Kuja while Cloud and Tidus leave to help Firion, and when Terra is defeated, Cecil fights Kuja in her place. Kuja declares he has no need for the bonds and values they hold as they are only figments of weak memories, but Cecil denies this, claiming their bonds have been created by fighting together in the cycles, and thus are genuine.

Cecil's fighting style is Split Soul due to his ability to change between Paladin and Dark Knight. His Dark Knight form specializes in slow, powerful attacks, while his Paladin form is fast and specializes in swift attacks that can hit multiple times with the weakness of limited range. Despite being mainly a melee fighter, both forms have magic and several ranged attacks. Cecil reverts to a Dark Knight after using a ground HP attack, while aerial HP attacks turn him into a Paladin. His constant transformations can be difficult to master.

Cecil is fought in Distant Glory and Inward Chaos. 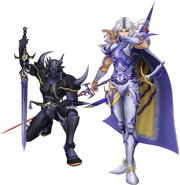 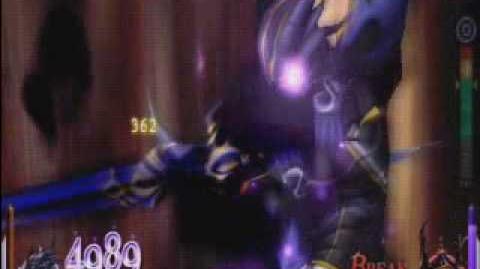 Cecil's EX Mode is Job Augment, where he exchanges his two spear-like weapons for traditional swords. Cecil gains "Inner Strength" and "Proteus" abilities. Inner Strength boosts Bravery damage Cecil does by 1.5 times, while Proteus allows him to change forms without attacking by pressing

. This allows Cecil to combo his attacks in new ways by quickly changing form.

Cecil's EX Burst is Soul Shift, an original attack where he attacks his opponent with the power of both his forms in succession. The player must enter the commands that appear on the sides of the screen simultaneously. A perfect EX Burst needs three such commands and starts with Cecil striking his opponent before turning into a Dark Knight and throwing his sword down. He then performs Darkness, where he shoots orbs of darkness at his opponent and ends the EX Burst by reverting into a Paladin, slashing twice and forming a cross of light, dealing HP damage. Failing to enter the commands will have Cecil prematurely end the EX Burst with Darkness.

Cecil can equip Swords, Greatswords, Axes, Shields, Gauntlets, Helms, Light Armor, and Heavy Armor. In Dissidia 012, Cecil can also equip Katanas, Spears, and Large Shields. Cecil is the only character able to equip the "Dark" equipment set, a low-level series of equipment obtained in his storyline.

CG render of Cecil as a Paladin.

CG render of Cecil as a Dark Knight.

Cecil's Light Fang's while a Paladin.

Victory pose (Paladin).
Add a photo to this gallery