An island so rich with nature's bounty visiting sky pirates named it the "Isle of Treasures". To this day they come to pillage these riches, even in its decimated state.

Cebe, Isle of Treasures is a location on the Muruc Cahuac Skysea which is an island, or later in the game, an archipelago from Lemurés in Final Fantasy XII: Revenant Wings. It was invaded by Sky Pirates during the auracite tournament. The canoe is required to reach the island.

Mission 17: Pirates and Parrot in Peril![]

In the end, Rikken had little new to say, so the search for the judge is back where it started. Rikken wastes no time finding trouble again. 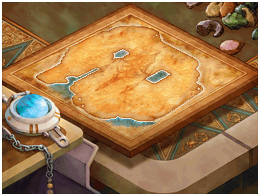