The Cavern of Ice, also known as Ice Cavern and Ice Cave, is a location from the original Final Fantasy. It is located north of Mount Gulg, and is accessible only by canoe.

The Cavern of Ice contains many cracked tiles that work as Pitfalls, breaking when the player sets foot on them. This results in the player being dropped to the floor below the dilapidated ice. While this is often an annoyance, dropping down a level via a cracked tile is the only way to reach the Levistone (Floater in the NES version). This is because the Levistone itself is surrounded by cracked tiles and is impossible to reach directly from the floor it lies on.

The cavern is also infamous for being obscenely more difficult than previous dungeons or even a number of dungeons afterwards; a large number of the enemy packs, such as the large packs of Winter Wolves or White Dragons have enough "frost power" to potentially kill the party in a single turn, Cockatrices are paired up with Mummies for the first time in this dungeon, making the Stone-inflicting birds more difficult to escape from, and the Dark Wizards which roam the lower floors have spells which can instantly kill one or more party members. Even in the "easy" versions of the game, large numbers of consumables are highly recommended for tackling this dungeon.

In Elfheim, the Warriors of Light learn of a buried Airship, and so proceed to the Cavern of Ice where the key to unearthing it--the Levistone--may be found.

The Cavern of Ice is a Realm Dungeon, unlocked by completing Cosmo Canyon. Completing it unlocks the Citadel of Trials.

The background theme that plays inside the Cavern of Ice is "Matoya's Cave". 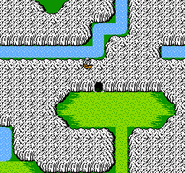 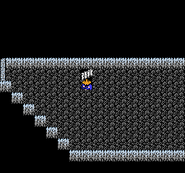 Cavern of Ice on the World Map (GBA).