The Cavern of Earth, also known as the Earth Cave and Terra Cavern, is a location from the original Final Fantasy. It is located south of Melmond, at the "Devil's Tail", and the Warriors of Light must come here to find the source of the earth's rot.

The first floor of the cave offers many branching paths away from the center starting point. The bend to the west of the entrance ladder is particularly dangerous as it forces repetitive battles at every single step, but the ladder to the next floor is a short walk east. The next three levels take some time to traverse through, as they are comprised of many small rooms and contain more powerful enemies. After defeating the Vampire and returning with the Earth Rod, the player can access the next two floors which hold even harder enemies.

The Warriors of Light descend through the cave and defeat a vampire residing on the third basement level, who seems to be the cause of the problem. However, this fails to stop the rotting of the earth. Later, they speak with the wise and ancient sage Sadda who lives in a cave to the west. Sadda gives them a rod with which they can move an obstacle at the back of the Vampire's chamber. They return with the rod and expose a secret passage, revealing two deeper floors into the cave.

Here, they find and defeat the Lich, the Fiend of Earth who is leeching power off from the Earth Crystal, and rid the earth of its rotting, the first purification of the Crystals.

If players head immediately left upon entering the area, they will come to a deadend passageway, where every step sends them into a battle with at least one Hill Gigas and up to three Lizards. If the player is sufficiently leveled, they can kill the enemy party in a couple rounds, earning several hundred EXP and approximately a thousand gil every battle. This is a good place to level-grind early on.

The background music for the Cavern of Earth is "Gurgu Volcano".

In the Confessions of the Creator Scenario, a Teleport Stone can be found at the Devil's Tail, and is named after the Cavern of Earth. Instead of the dungeon, the Chasm in the Rotting Land Gateway is located in the middle of the mountains. The player's first objective in the storyline is to head here and rescue the mured moogle.

After rescuing him and eventually being directed to the Lands of Discord, the mured moogle reveals himself as Cid of the Lufaine and reveals the circumstances that lead to him becoming a moogle and being sealed in the gateway. When Chaos became Feral Chaos and killed all the summoned warriors, Cid took on the form of a moogle to enter World B and sealed himself and Cosmos in the depths of the Chasm in the Rotting Land gateway to protect the goddess from Feral Chaos's wrath. The time being sealed caused Cid to lose many of his memories, which he began to recover once the player rescued him.

The Reports reveal that the Chasm in the Rotting Land is where Cid stayed during the cycles of war and conducted his studies and experiments. Here he created the Warrior of Light by infusing a manikin with his own memories, but when it did not show a will of its own, he placed it among the warriors summoned by the gods to observe how it grew.

Word reaches the warriors that a vampire residing within the Cavern of Earth is responsible for the rot that plagues the land around Melmond. The warriors go to the cavern to investigate.

When the warriors brandish the Earth Rod, a stone slab at the back of the vampire's room splits, revealing a stairway. Steeling their resolve, the warriors press onward. 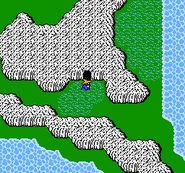 Cavern of Earth on the World Map (GBA).

The Chasm in the Rotting Land Gateway in World B in Dissidia 012 Final Fantasy.

The japanese dungeon image for Cavern of Earth 1 in Final Fantasy Record Keeper.

The japanese dungeon image for Cavern of Earth 2 in Final Fantasy Record Keeper.

[view · edit · purge]"Terra" is the Latin word for "Earth". It is also present in some Latin-derived languages such as Italian and Portuguese.