Cave to the Sealed Gate

Cave to the Sealed Gate

Terra leads the party through the cave to plea with the espers for their help in the war against the Empire. Though they make it to the gate, they discover that Kefka and two imperial soldiers followed them. Terra's friends fight him off while Terra calls to the espers, and Yura and a handful of other espers escape the gate and decimate the Empire.

Later, other espers open the gate to help fight Kefka in Thamasa. They fail to help, which lets Kefka and Gestahl to enter the Esper World in search for the Warring Triad. The cave and the island it is on rise as the Floating Continent.

The Cave to the Sealed Gate is a volcanic region, as the main cavern is full of lava and many enemies have an affinity to fire. The upper levels are unremarkable, but from the third level on the cave becomes a maze of puzzles and traps. These include walkways over the lava that change position, switches that destroy bridges to block the party's path, and secret rooms opened by switches.

At the far end of the cave is the Sealed Gate, seemingly located within a pillar of rock rising from a sea of storm clouds, with a wooden bridge connecting a cliff to the gate. Given the esper world is in another realm, it is possible this final area of the Sealed Gate is trans-dimensional, which would explain how storm clouds could exist "inside" the cave. Alternatively, the final area may be located in the open air within the mountains the cave is located in.

In the large main chamber, the chest immediately in view from the entrance contains a Hi-Ether. When crossing a bridge, pulling the switch drops the party down and creates a bridge to a chest left and up of where the party lands; this chest contains a Genji Glove. By the save point up ahead is a Tent. Down the large staircase is a chest with a Hi-Ether, and through the hidden passage in the wall is a ledge with a chest containing an Elixir. In a hidden cave south of this ledge are four chests with the Ultima Weapon, a Hi-Ether, and two Magicite Shards. There is a third Magicite Shard in a chest by the exit to the last area of the cave.

There are also four treasures buried in the dirt beneath the long stairwell just past the save point—a switch near the save point spawns a Ninja who alludes to them. Directly to the left of the bottom of the stairs, there is an Invisibility Scroll. A few times above the cave entrance to the right is a Water Scroll. To the left of the entrance to the high ground, directly below where the Invisibility Scroll was, is a Gold Needle. Finally, three tiles above the treasure chest is 293 gil.

The various bridge puzzles in the cave.

The party's objective is to reach the Sealed Gate at the far end of the cave. The first two rooms are linear and lack obstacles, but the third room is unique. It is a single room consisting of several broken bridges spanning an expanse of lava in various ways. As the player crosses the bridges they shift between one of two configurations. If during such a shift the party is left without a bridge beneath them, they fall into the lava and are warped to the entrance, taking minor damage. At places it is possible to walk between the two bridge pieces as they shift, in other places the player must stand in place and let the bridges shift under them; it depends on the exact position.

Once the party reaches the upper-right ledge, where a Heiji's Jitte is in the chest, the bridges on the right side change pattern. As before, if the party falls into the lava, they warp back to the entrance. The simplest way to make it through the room is to move right over the bridges, holding right to move over them as they shift, and then move down, pausing to let the bridges shift under the party's feet, then moving on. The images to the right show the two patterns the bridges change between.

The first and second bridge patterns.

In the main cavern the party needs to go right, ignoring the chest, and pull the switch on the bridge to drop down and make a bridge appear to that chest, which contains a Genji Glove. On the path ahead is a rock wall with two switches. Pulling the right switch spawns a Ninja to attack the party, which can be done repeatedly. The left switch opens a secret doorway to a room with a save point. Outside, pulling the switch on the bridge makes a massive stairwell. Descending the stairs and heading right into the cave entrance, the player can navigate through a hidden passage through the wall to progress.

The player should ignore the chest in the upper-right, as pulling it destroys a part of bridge ahead, but a programming oversight will overwrite this anyway (see "behind the scenes" below for details). In the lower area the switch reveals a hidden cavern with treasures, including the Ultima Weapon, a unique and valuable sword. To the right, a switch on a platform raises another section of rock to the right. From there, the party can move right, up the stairs, and right again to the final section of the cave, and exit the cave to the Sealed Gate.

At the Sealed Gate, several cutscenes and a scripted battle occur, after which the party will be back in the cave. A new cave exit has appeared in the wall below. It is a one-way exit back to the first area. From there, the player must return to the Imperial Outpost and attempt to exit to meet up with the party and advance the story.

The Cave to the Sealed Gate and the land east of the bridge it sits on do not appear in the World of Ruin, leaving only water in its place. In an annotated draft map of the World of Ruin made during development, this area of land is still shown. On this landmass is a label reading Dead Sea (死海, Shikai?).[1]

During a flashback to the Imperial invasion of the esper world, the exterior of the gate is a wooded area with water, entirely unlike the interior of the cave. The area used for the scene is actually the background of the Phantom Forest.

The chest with a switch inside it near the end of the cave may seem to have no effect, but is actually functional: it removes a tile of bridge at the end of this area that prevents the party from reaching the exit. However, a programming oversight combined with the player's probable actions to reach the chest with the switch result in the trap being easily avoided, and the player may not even realize it was intended as a trap.

Another programming oversight makes the vanished bridge tile automatically reappear after a random encounter, meaning that, even if raising the right-hand column did not overwrite the bridge tile, the player would still probably not notice the effect of the switch in the chest, as it is unlikely (albeit possible) they would be able to walk from the place where the chest can first be reached all the way to the area with the missing bridge tile without triggering at least one random encounter.

Cave to the Sealed Gate.

Cave to the Sealed Gate (Special).

"Esper World", also known as "Another World of Beasts", is the background theme of the Cave to the Sealed Gate. 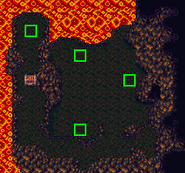 The buried treasures in the pre-Pixel Remaster versions. 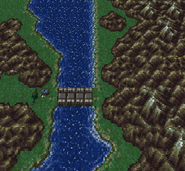 The entrance to the Cave to the Sealed Gate (SNES). 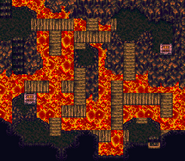 Inside the Cave to the Sealed Gate (SNES).

The entrance on the World of Balance map (2014 mobile/Steam).