Cave on the Veldt

Cave on the Veldt

The Cave on the Veldt is a location in Final Fantasy VI. It is located on the Veldt in the World of Ruin, and is used as a hideout for a gang of thieves.

When the party first enters the cave, Interceptor comes up to them and barks, then runs to lead them further into the cave. Deep in the cave, the party will find either Shadow or Relm.

When the party approaches Shadow/Relm, the Behemoth King attacks them. Once it is defeated, the party will take the injured party member to Thamasa. At this point, if they rescued Relm, she can now be found in Owzer's Mansion in Jidoor. If they rescued Shadow, he will appear in Dragon's Neck Coliseum when the player bets the Ichigeki, a weapon found in the cave.

The cave is also home to a band of thieves that give the party hints on how to recruit Gau - he will not approach if the party is full; with three people or fewer, he will appear.

The Cave in the Veldt opens up into a large central cavern in which the thieves camp. A passage leads down to a lower section of this cavern where Shadow/Relm has fallen. The cave seems at least partially man-made, as there are doors and a switch in its lower section. It may be that the thieves use the entire cave as their base and installed these fixtures.

A chest containing the Berserker Ring is in the main cavern, and a hidden passage to the left inside the doorway leads to a monster-in-a-box, the Death Warden, that drops the Tigerfangs. The Ichigeki is located in the downstairs area, and should not be missed, as it is necessary to bet at the Coliseum to recruit Shadow if he is rescued here.

The party fights both versions of the Behemoth King to rescue their found ally.

In the lowest part of the cave, the party will find a former ally collapsed - if the player waited for Shadow before leaving the Floating Continent, it will be him, if they did not wait, it will be Relm. Upon approaching them, the party fights the Behemoth King and then takes the rescued party member back to Thamasa.

If Shadow was rescued, heading to Dragon's Neck Coliseum after rescuing him and betting the Ichigeki will initiate a battle against Shadow, and he will permanently join the party when defeated. If Relm was rescued, the player can now proceed to Jidoor and start the quest to recruit her within the Owzer's house. 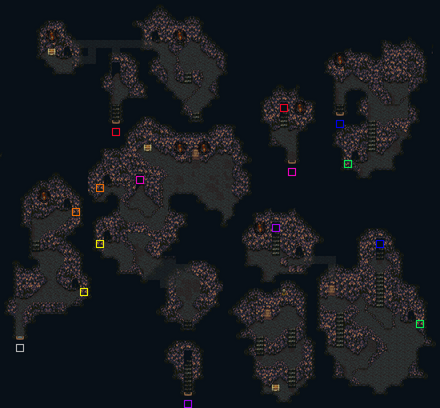 "The Phantom Forest" plays inside of the Cave on the Veldt.

Cave on the Veldt[]

A development document featuring an early design of the World of Ruin world map has the cave on the Veldt labeled as Fenrir Cave (フェンリルの洞窟, Fenriru no Dōkutsu?)[1]. Another design document listing dungeons in the World of Ruin gives the boss to be fought in the Cave on the Veldt (under its final name) as a wolf-type enemy[2]. The historical order of these documents is unknown, so it is possible the wolf-type enemy became Fenrir, or that Fenrir was disassociated with the cave and the wolf-type boss idea remained as a placeholder. The final version of the dungeon has no association with wolves, and the boss is the Behemoth King.

In the Super NES version of the game, the party says "let's take her back to Thamasa" when checking on their rescued ally, using the same female pronoun regardless of whether it is Shadow or Relm in the cave. In the PlayStation release, this was changed to use "him", still for both characters. The Game Boy Advance release changed the line entirely to not refer to the gender of the rescued character at all.

In the Super NES version, one of the thieves mentions the dinosaur forest to the party and "a fearsome dragon" that lives there, implying a specific enemy that can be sought out there. This led to rumors about a boss that could be encountered if the player defeated enough enemies within the forest, and defeating this dragon boss would reward an item to revive General Leo and have him permanently join the party. No such boss or item exists, and in the GBA version, the line is re-translated to refer to "incredibly strong dinosaurs" rather than a specific enemy. 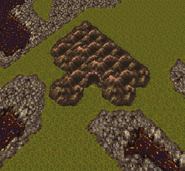 Cave on the Veldt on the world map (SNES). 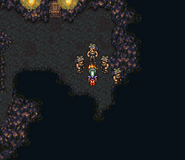 The band of thieves (SNES).

The cave on the world map (GBA).

Inside the cave (GBA).

The Japanese dungeon image for Cave on the Veldt in Final Fantasy Record Keeper.

[view · edit · purge]Veld, also spelled veldt, is a type of wide open rural landscape in Southern Africa. Particularly, it is a flat area covered in grass or low scrub, especially in the countries of South Africa, Lesotho, Swaziland, Zimbabwe, Botswana, and Namibia.