The Cave of Tides, also known as Water Cave, is a location in Final Fantasy III found in a southeastern island on the Overworld. It houses the Water Crystal. After defeating the Kraken here, the dark flood covering the Surface World subsides, revealing three continents and resuming the flow of time.

After meeting Aria at the Wrecked Ship, the Warriors of the Light escort her to the Temple of Water and through the Cave of Tides where she unseals the gate to the bottom, leading to the Crystal.

Upon reaching the crystal room Aria restores the Water Crystal, but Kraken ambushes the Warriors of the Light. Aria is mortally wounded when blocking an arrow meant for Luneth. Enraged, the warriors defeat Kraken, and after Aria's last words, the Water Crystal blesses the warriors with its power.

The background music for the Cave of Tides is "The Altar Cave".

The Cave of Tides appears as the Field Music Sequence for "Elia, Maiden of Water."

The power of the Water Crystal has been lost, covering the Surface World in a dark flood. The party makes for the Cave of Tides to restore the crystal's light. 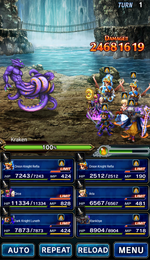 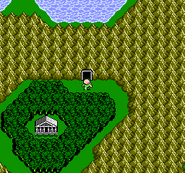 Cave of Tides on the World Map (NES).