The Cave of Shadows, also known as the Cave of Darkness, is a location in Final Fantasy III found on the largest continent on the Overworld and home to the Fang of Earth. The player must navigate through a maze of mountain ranges with the Invincible to reach the cave. The separate rooms in the cave are a maze of hidden paths.

After obtaining the Invincible at the Ancient Ruins, Unei tasks the Warriors of the Light with the retrieval of the Fang of Earth, the last fang needed to destroy the sentinel statues Xande summoned in order to halt any attempt to access the Ancients' Maze and the Crystal Tower, from the Cave of Shadows.

After reaching the bottom of the Cave, the party meets Hecatoncheir.

Most of the monsters in the Cave of Shadows will use Divide or Multiply if attacked with any weapon other than a katana wielded by a Dark Knight or a Ninja. They can also be attacked with magic.

"Castle of Hein" is the background theme of this dungeon. 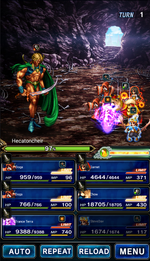