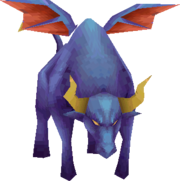 Catoblepas can be found in the Dawn of Souls dungeons also found in the PSP/iOS versions. It can Petrify foes with his Gaze attack.

There are three other enemies related to Catoblepas:

Catoblepas can be found at the Unknown Palace on the Soul of Rebirth dungeons of the GBA/PSP/iOS versions.

There are three other enemies related to Catoblepas:

An enemy found on the northwestern part of the world map and inside the Dragon Spire in southeastern Saronia.

Catoblepas appears as an enemy in the Advance version and in the Complete Collection.

Main article: Catoblepas (The After Years)

Catoblepas are powerful enemies that can inflict Petrify on a party member, and are also one of the few enemies to drop the very rare Aegis Shield and Stoneblade. They are only fought in the Depths.

The Catoblepas is also known as Shoat. It is a hidden enemy found around the areas of Moore and has the ability Evil Eye, an attack that will petrify a character. After besting it in battle it is acquired as a summon.

The Catoblepas is one of the eight minions fought in Ultimecia Castle and uses Thunder attacks. It has very high Strength and gives a powerful blow to the party with its Deadly Horn attack. It has a Triple Triad card.

Catoblepas can be found in the Forgotten Continent in the Seaways Canyon and can be fought in the basement of Treno's Knight's House. The player will receive 15,000 gil from the owner upon defeating it.

Catoblepas is a fiend that can be unlocked in the Monster Arena. It is nearly identical in looks to the Behemoth but is a much stronger opponent.

Catoblepas is a Mark petitioned by War-chief Supinelu in Jahara. It is found in the Zertinan Caverns and is stronger than most of the other Behemoth-class monsters. There is also a scene where a Catoblepas is defeated by Fury in the Necrohol of Nabudis.

Catoblepas appears as the second boss of Halatali (Hard Mode). Its appearance is based on the Catoblepas from Final Fantasy V.

Colossal Catoblepases reside on the pond in the Duscae region. They are enormous enemies with high amounts of HP. Additionally, Catoblepas is fought during the Hunt Marsh Madness! The Giant Awakens. 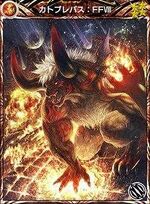 [view · edit · purge]Catoblepas (from the Greek expression καταβλέπω katablépō meaning "to look downwards") is a legendary creature from Ethiopia, described first by Pliny the Elder and later by Claudius Aelianus. It is said to have the body of a buffalo and the head of a wild boar. Its back has scales that protect the beast, and its head is always pointing downwards due to its head being heavy. Its stare or breath could either turn people into stone, or kill them.