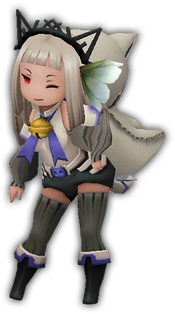 Train cats to wield the abilities of your foes.

The Catmancer (ねこ使い, Nekotsukai?, lit. Cat Master) is an asterisk that appears in Bravely Second: End Layer. It is obtained by defeating Minette Napkatti in the Harena Sea Caves.

The Catmancer has a high proficiency with knuckles and axes, and like the Vampire job in Bravely Default, have all around good stats. They also have the passive skill Learning, with which they can learn the abilities of certain enemies to use with Catmancy or Cat Mastery, which uses up cat food whenever they want to use an enemy skill (obtainable using the Dig skill or bought from the Fort-Lune shops).

The Catmancer's specialty is Learning. Its job command is Catmancy.