Catch (とらえる, Toraeru?), also known as Capture, is a recurring ability in the Final Fantasy series. It allows the player to capture a monster to use as either as an attack, as an ally, or for a sidequest.

Catch is the last ability of the Beastmaster job, requiring 300 ABP to master. It enables the player to capture a weakened monster, and then release it later for the monster to execute certain abilities. The player must have weakened the monster to 12.5% or less of its max HP in order to successfully capture it. If the party member is equipped with a Kornago Gourd, the player will then only need to reduce the monster's HP to 1/2.

The Catch bug exists in all versions with the enemies Gel Fish and Moss Fungus.

Capture is an auto-ability that allows the player to capture a monster if they deal the killing blow with it equipped, either using physical attacks or skills. Landing a killing blow using magic will not capture the monster.

Up to ten of each fiend can be captured, and are required to unlock special bosses at the Monster Arena. Capture cannot be customized onto weapons; weapons with Capture and one empty slot can be bought from the Monster Arena for a price of 9075 gil. Capture is the dominant auto-ability for weapons, and therefore the weapon's name will not change regardless of what else is customized onto it. The sword for Tidus is the Taming Sword. The staff for Yuna is the Herding Staff. The blitzball for Wakka is the Catcher. The doll for Lulu is the Trapper Mog. The spear for Kimahri is the Taming Spear. The katana for Auron is the Beastmaster. The claw for Rikku is the Iron Grip.

In the International/PAL/HD versions, capturing an enemy that has a final attack will stop them from enacting it. The Behemoth King and Splasher are the only capturable enemies that have a final attack.

Despite being a boss and not appearing anywhere else, Tros can be captured, though this can only be done via a cheating device to get the needed weapons early on. The game will claim it was captured upon defeat, instead of saying it cannot be. Though it will not show up in the Monster Arena, this capture is recorded in the save file.

The superboss Nemesis is unlocked at the Monster Arena by capturing ten of each capturable fiend throughout Spira.

Capture is a Beastmaster ability. The player can only capture a monster if it has only 10% of its HP left, and after it is captured, it may be released later in battle by using the Sic or Turncoat command. Monsters that are captured can be used for Sic three times. 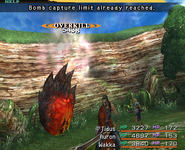 Message for capture limit of a fiend that the player has caught max of in Final Fantasy X.