Catch is the final ability learned by the Beastmaster job, requiring 300 ABP to master. It enables the player to capture a weakened monster, and then release it later for the monster to execute certain abilities.

Final Fantasy V was the first Final Fantasy game to to include an ability to capture monsters and use them in battle.

The player must have weakened the monster to 12.5% or less of its max HP to capture it. If the character is equipped with a Kornago Gourd, the player will only need to reduce the monster's HP to 1/2.

The Catch bug exists in all versions of the game with the enemies Gel Fish and Moss Fungus. 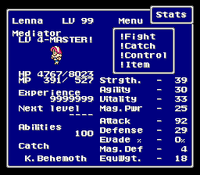 When a character catches a monster in the SNES, the enemy name should be displayed on the Status menu under the Catch header, but the field is left blank for the version 1.1 of the RPGe translation. The reason this is because the enemy names table was stored in another location within the data. Also, the length of the monster names were 8 bytes, but was expanded to 10 bytes.

The damage formula for Strong Attack is as follows:

The following table that lists all of the abilities that can be used via releasing caught monsters.