Catastrophe is a special monster in Final Fantasy X bred as part of the Original Creation in the Monster Arena. It becomes available after six monsters have been bred in the Area Conquest section. Catastrophe resembles the Sinspawn Geneaux fought on the steps of Kilika Temple, and Sinspawn Genais that is fought on Sin.

Catastrophe starts with its shell closed. After suffering 440,001 HP in damage, it will come out of its shell and begin unleashing a variety of attacks. While in its shell, it will alternate between doing nothing and using Toxic Cloud, which inflicts Poison, Confuse, and Curse. While out of its shell, it will use Toxic Spray, which inflicts Full Break; Demi, which reduces the current HP of the party by 1/4; and Hundred Thorns, in that order. Toxic Spray will kill a party member unless they have either Break HP Limit or Protect, and its Hundred Thorns will do the same, except on the entire party.

Catastrophe drops weapons with status strikes and armor with status proofs. Its equipment drops provide a hidden 6% critical hit chance bonus instead of the usual 3% (this is relevant to weapons and armor, but only to attacks that deal physical damage).

A good strategy is to have have a party with Yuna, Wakka, and another person of player's choice. The player should have all of their fully powered Celestial Weapons. Wakka should use the Warrior Overdrive Mode. The first recommended ability is Hastega with whoever goes first. The player will have plenty of time to buff up, as Catastrophe does not attack or counterattack until later. Yuna should cast Auto-Life on all party members while Wakka and the other character begin attacking.

Whenever Wakka has a full Overdrive gauge he should use Attack Reels and attempt to land all "2 Hit" blocks making for 12 attacks total. When Catastrophe comes out of its shell other characters' Overdrives can be used, as they deal much more damage now. If the player fails to kill Catastrophe before it attacks, Auto-Life works as the backup.

An alternative approach is to use aeons since most of Catastrophe's attacks are status-based and aeons are immune. Bahamut is well suited, particularly if he is upgraded with Haste and Protect, along with a method of healing. He should use Shield before each of the Hundred Thorn attacks. 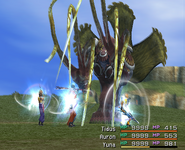 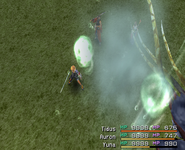 Toxic Spray.
Add a photo to this gallery

Retrieved from "https://finalfantasy.fandom.com/wiki/Catastrophe_(Final_Fantasy_X)?oldid=3380881"
Community content is available under CC-BY-SA unless otherwise noted.