Use the Catastrophe manual after obtaining all Barret's other Limit Breaks

When Barret performs the Catastrophe attack, he will begin by charging his weapon towards the ground, before jumping in the air, and after reaching a height, fires a huge continuous blast towards opponents. While this blast is ongoing, ten hits will register separately.

As a level 4 Limit, Catastrophe is learned from a manual after Barret has learned his other Limit Breaks. The manual can be obtained after the Huge Materia quest in Corel by talking to a woman in the ruined building near the inn in North Corel. 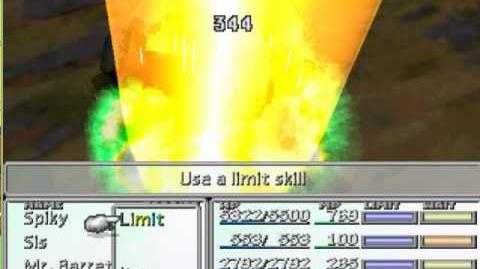 Catastrophe is Barret's best Limit Break for most of the game, but can be outclassed by Angermax at its max potential. Angermax performs 18 hits at half damage each, totaling 9 times Barret's damage overall, which is normally below Barret's max damage. However, if Barret equips Missing Score with sufficient mastered Materia equipped, or stat-maxes Barret with sources or Hero Drinks, and Angermax's attacks deal close to 9999 damage, it will deal more damage overall than the Catastrophe. For most normal playthroughs, however, Catastrophe will remain Barret's strongest Limit Break.