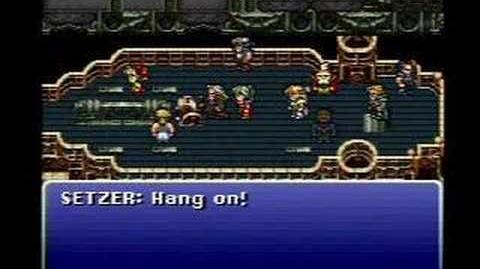 On that day, the World was changed forever...

The cataclysm (世界大破壊, sekai daihakai?, lit. world cataclysm) is the destruction of the World of Balance in Final Fantasy VI. The event is alluded by several characters, both playable and non-playable, being referred to as "the very day the world collapsed", "end of the world". Witnessing the end of the world in the mobile/Steam version earns the Washed Up on Solitary Island achievement.

The theme Catastrophe is named after this event (大破壊, Daihakai?). Though not used in in-game text, the event is referred to as the World Collapse (世界崩壊, Sekai Hōkai?) in Japanese materials. This is most evident in the Japanese names for the two worlds being called "before/after Collapse". English uses its own terms for the two worlds, and the only time these terms have been directly translated was the PlayStation Bestiary which used "Pre-C" and "Post-C" due to space constraints.

After the attack on Thamasa, Emperor Gestahl and Kefka Palazzo raise the Floating Continent, uncovering the Warring Triad, a trio of petrified deities. When the Returners attack the Floating Continent, Kefka attempts to revive the Triad, but Gestahl, knowing the gods' alignment affects the shape of the planet, urges him to stop. Gestahl uses a variety of powerful magic to attack him, but Kefka uses the power of the Triad to defeat him before pitching his body off the Floating Continent. Kefka begins repositioning the Triad, destabilizing their magical field.

The Triad being out of alignment results in imbalance of power, shattering the world's main continents into a series of islands, releasing many sealed monsters like Deathgaze, Humbaba and the eight legendary dragons, killing countless people and animals and destroying Setzer's airship, from which the party bails just in time, though they wind up separated in the chaos. The new world comes to be called the World of Ruin where many plants refuse to grow, monsters infused with magic roam the wasteland, and Kefka is worshiped as a god. Now the sole ruler of the world, Kefka rains down doom and destruction with the Light of Judgment from his tower.

After Kefka is killed by the regrouped Returners, the people begin to rebuild and undo the damage the world has sustained.

The track that plays during the end of the world scene is "Metamorphosis".

The developers did not initially intend to create a "world of ruin". Rather, the plan was for the party to save the world and defeat Kefka just as the world was about to be destroyed. However, because the game was coming along more smoothly than expected, the developers could free up time to implement another version of the world after its "end".[1]

The end of the world is briefly foreshadowed in the game's title screen with the thunderstorm, as well as the text for the game being engulfed in flames and cutting to what is implied to be destroyed towns.