Cat is a recurring animal in the Final Fantasy series. Less common than the dog, common house cats have appeared as pets and background elements in populated areas. Feline beings at times appear as monsters, summons and other magical beings, such as Gimme Cat in Final Fantasy IX and Cait Sith. However, this article focuses on cats as regular animals.

On the second floor of the Barracks in Upper Junon, cats of both types can be found on the bed in the top right if the player visits pre-Meteorfall. The orange-brown cat sits curled, while the calico cat walks back and forth and meows. After Meteor is summoned, three more smaller cats of various sizes and descriptions occupy the room.

Cat's House in Wutai Village has an HP Absorb Materia upstairs, but the path to it is blocked by cats until after Yuffie's quest has been completed. The passage upstairs has another cat, although it cannot be seen by the box and its presence is only made known when it meows on contact. The house contains 11 cats, and unique to this house are some darker appearing cats who use a shaded version of the orange-brown cat model.

A couple of cats appear in the Accessory Store in Mideel.

The Bird room of the Debug Room has an orange-brown cat that deals with areas concerning Junon.

The sleeping cat in Timber

Cats wander around Timber. A girl near the hotel wants a cat but her mother is allergic. The back alley behind the Aphorora Pub has many cats and the Forest Fox Hideout has a cat living upstairs. It sleeps on the kid's bed, who comments that the cat gets bigger and he doesn't dare to move it. The cat model is enlarged if the player visits the house later.

The Winhill pub has a cat that is part of the vase sidequest. After finding the other pieces, the player must speak to the lady upstairs till she mentions the flowers' aroma. The player must examine the flowers downstairs in the bottom right corner of the screen, and Raine's ghost will appear, but is replaced by a cat who has the last vase piece.

Alley cats are found in Alexandria and Treno. At the beginning of the game the player can find a boy named Tom, down at the docks near the church who asks Vivi to find his missing cat, Mittens. The cat can be found in the very first area of the city, where the statue stands in the middle. Talking to the boy after having found the cat nets the player the Bomb card.

Queen Brahne is depicted holding a cat in a painting in Alexandria Castle. A concept art for her depicts her lounging on a "sofa" that is actually a gigantic cat ( 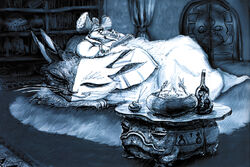 Serah's cat in New Bodhum is Snow, named after her fiance Snow Villiers. She was found as a stray and ended up becoming a pet for the all New Bodhum, as various families have different names for her.

"Stuck in a Gem" is a quest in Luxerion. Gem is a cat in the southeastern part of Luxerion, but in truth, "Gem" is a boy named Ronan whose desire to bring his cat back to life resulted with his soul being transferred into it by a potion he received from Lumina. Gem asks Lightning to restore her owner's soul back into his body.

Ronan is located in the Market area of the Old Town, east from North Station and south from Wall of Joy. He is a boy surrounded by cats, who will react to the Starlit Spice and take it from Lightning if she comes into contact with them.

There is a hungry cat in Galdin Quay Noctis wants to feed. After catching a fish and having it cooked by Coctura Arlund at the restaurant, the cat accepts the food.

The cat appears later in Cape Caem behind the lighthouse, again hungry. The player can either purchase luxury cat food from the shop at the parking lot for 20,000 gil, or have Monica Elshett cook a fish at the hideout's kitchen. Completing the quest yields a Sky Gemstone, one of the items Cid requests for weapon upgrades.

There are cats inside Perpetouss Keep during the Adventurer from Another World quest. The talk icon appears when near them, but the player can't further interact with them. During the ending credits to the quest, Y'jhimei lies on the ground with a car sitting on her back and Prompto may take a photo of this scene for the player's album.

Before the game was out developers demoed Lestallum via a "dog cam", exploring the town as Umbra. Another studio Square Enix had outsourced some of the work to did their own demo in the vein of "cat cam", showing a train station from a cat model's point of view. This train station doesn't appear in the final game.

Final Fantasy: The 4 Heroes of LightEdit

The player can transform Aire into a white cat and Rekoteh into a blue cat with the Animal Staff. Characters who enter battle in animal form retain their items and commands, but their weapons are not visible and stats are decreased. As animals, the player can converse with the non-playable animals found in towns, such as the seagulls in Liberte.

Aire is a spoiled princess who seeks treasure in a nocturnal whirlpool. However, when she opens the chest she is cursed into becoming a cat and she discovers that only animals and fairies can understand her. Wanting to become human again Aire heads to Arbor. She teams up with her friend Brandt who takes her for an ordinary cat. As soon as they set foot in Arbor Brandt is turned into a plant, and Aire must save him by retrieving the Animal Staff. Aire and Brandt meet with Queen Arbor and agree to calm Arbaroc, Arbor's guardian, from a rampage. In exchange, the Queen turns them back into humans. Meanwhile, Aire's friend Jusqua has found a stray cat whom he believes to be the cursed Aire, and tries to expel the "curse" from the cat.

Recurring elements and topics
Retrieved from "https://finalfantasy.fandom.com/wiki/Cat?oldid=3216521"
Community content is available under CC-BY-SA unless otherwise noted.