Castle Sasune is a location in Final Fantasy III. Located on the Floating Continent, it is in the same area as Ur and Kazus. According to a local soldier, the Red Mages are warriors who have mastered both the way of the sword and magic, and every soldier in Sasune aspires to become one.

The Warriors of the Light visit Sasune so as to obtain the castle's Mythril Ring and lift the Djinn's curse, but they find that Princess Sara Altney has taken it to the Sealed Cave, where the Djinn resides.

In the 3D versions, the party meets Ingus here, since he is unaffected by the Djinn's curse. Hoping to break the curse on the castle, Ingus joins the party to find the princess.

Later, after defeating the Djinn, the party returns here to cleanse the Mythril Ring used to seal him. This banishes the curse once and for all.

Note: Enemies are only encountered in the western tower.

"Return of the Warriors" from Final Fantasy III (DS)

The background music that plays in Castle Sasune before the Djinn is defeated is called "The Djinn's Curse", and is replaced by "Return of the Warriors" after the Djinn is killed.

Sasune is present as a room for customized characters of the game's Multiplayer Mode Online Lobby. One of the rooms from the Online Lobby in Dissidia Final Fantasy is named Sasune.

Castle Sasune is featured in the background of the "Eternal Wind" Field Music Sequence.

The people of Kazus have been transformed into ghostly apparitions by the Djinn, a being of fire and darkness. Now the Warriors of Light travel to Castle Sasune in search of a mythril ring to banish the Djinn and seal him away.

According to one of the Trivia Mognet Questions in Dissidia, Sasune is the kingdom where Prince Schneider hails from in I Want to be Your Canary from Final Fantasy IX.

In the Dawn of Souls and subsequent remakes of the original Final Fantasy, Sasune is one of the automatic names the player can choose for the Warrior job. 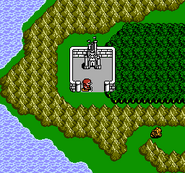 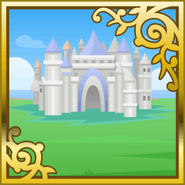 [view · edit · purge]Sasune most likely derives from Sassoon, a name historically most often associated with certain families of Iraqi Jews, but is also found among Armenian and Kurdish families, and the name for all three is derived from Sason (Armenian Սասուն, Sasoun; Hebrew שָׂשׂוֹן, Sāsōn; Kurdish Sason or Qabilcewz; Turkish Sason) in an area of eastern Anatolia to the west of Lake Van. The name is believed to be of Armenian origin.