Castle Fynn is a location from Final Fantasy II. It is the residence of the royal family of Fynn, and the center of the Fynn Kingdom.

A mirror exists in the castle. Presenting the Pendant to the mirror gives the player a dragon.

Castle Fynn is conquered and occupied by the Palamecia Empire alongside with the rest of the city, after Borghen, a general of Fynn, betrays the kingdom. The people of Fynn regroup in Altair, forming the Wild Rose Rebellion.

They attempt to retake Fynn, and Firion and his friends are assigned to deal with the general of the occupation forces, who resides in the castle. They defeat Gottos, the leader of the Palamecian forces in Fynn, allowing the rebels to return to their home. However, Minwu is still missing when he left to acquire the Ultima Tome so Hilda tasks the party in looking for Minwu.

With the help of Paul, the party enters the basement of the castle to obtain the White Mask. Later, after acquiring the Ultima Tome, the Cyclone, the Emperor's new weapon, is outside the castle. After the Emperor has been defeated, they hold a celebration until the Dark Knight, Leon has crowned himself emperor.

After the party excluding Ricard escapes Castle Palamecia, Hilda invites Leon to join them when the party brings him back with them. After the Dark Emperor has been defeated for good at Pandaemonium, Leon leaves the kingdom, and Hilda congratulates the party for their victory and plans to rebuild Fynn.

The background music inside Castle Fynn is called "Ancient Castle". 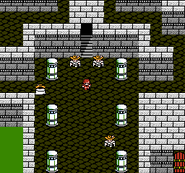