A freight stop in the middle of the Succarpe region offers little in the way of leisure for passengers, but it provides the perfect cover for Noct and his retinue to run a necessary errand.

Cartanica is a train station in Niflheim territory in Final Fantasy XV visited in Chapter 10. It is an area that used to be rife with natural resources, but was sapped dry by the empire's effort to mass produce magiteknology, leaving behind a ghost town and abandoned industrial sites. The player can only explore the station and the stationary trains. Inside the trains the player can use a lodging and a restaurant.

On a seat at the train station. Missable if the player doesn't read it during Chapter 10.

Desolate district in the eastern reaches of the western continent. The railway that transects imperial territory still stops at this station, but few board the Magna Fortia from Cartanica these days.

The elevated railroad platform offers an expansive view of the surrounding area. Retaining walls hold back soul on the Succarpe mountain slopes, while gas and oil fields pepper the ground below. The famed Fodina Caestino can also be seen from the station, with an elevator providing direct access.

Niflheim sought to recover and restore the magiteknology of old as the key to insuring the nation's future prosperity—but mass production of said magiteknology required enormous quantities of oil and coal. Thus, the empire set its sights on Cartanica, a once-lively town rife with natural fuels. After the empire had its fill, however, the city was left a shell of its former self, drained of its resources and devoid of human life.

Prince Noctis and his friends get off the train at Cartanica to visit Fodina Caestino, a local quarry because Cor Leonis had told them a royal tomb lies in its depths. Ignis Scientia lost his vision in the battle at Altissia, and Gladiolus Amicitia is unhappy with Noctis's inability to deal with his losses, and thus the atmosphere is tense as they head to the quarry. They find the tomb and Ignis speaks his mind to mend the rift that has formed between them, and the party continues their journey on the train. Unbeknownst to them, however, Ardyn Izunia notices their boarding and proceeds to follow them via an adjacent car.

The player can also collect Pet Chocochicks as part of a quest (see below). For completing the chick quest, the player also gets some Curiel Greens.

There are also almanac entries for Cartanica and Fodina Caestino here; if not read during Chapter 10, the player will miss them. Cartanica's entry is on a bench on the station, whereas the Fodina Caestino entry is in the left end of the stationary train across from the Magna Fortia (the train the player deboarded), past the rest area.

There is a diner in the stationary train where the player can eat, but it only has one menu item.

The sleeping wagon of the stationary train provides a 10% EXP multiplier and costs 30 gil. Its name is Italian for "wagon hotel of Cartanica".

The arms vendor is on the platform operated by an older man in train conductor's uniform. It sells the same weapons and accessories as the shops in Altissia.

The shop is operated by an older woman at a food stand with chips and jars and bottles of food and condiments.

They're the most adorable chocochicks in the world!

Chocobaby Roundup is similar to the chocobo-catching minigame from the Moogle Chocobo Carnival. It was added in patch 1.23. A woman called Chocolover on the platform asks for Noctis to collect her four wayward chocobo chicks. The chicks' key item description reveals they are called Yelro, Jarro, Becky, and Joe.

One chick is on the platform, one is on the stationary train, one is at the south end of the platform, and one is down the stairs in front the lift that takes to Fodina Caestino. They will run when approached and the player needs to catch them.

If the player departs Cartanica without completing the quest, it becomes permanently missable.

Move over, Prompto—there's a new camera king in town.

Added in patch 1.23, the player can talk to a journalist near the stairs that lead down to the quarry, who tasks Noctis with manually taking photos of various landmarks in Fodina Caestino. The player needs to stand on spot where the quest marker is on the map, and the field icon "take photo" appears. Using the manual camera mode, the player needs to take a photo of the broken machine near the tree from three sides (zoom out so all of it fits into the frame), and another picture of an abandoned shed (position the crosshair in the middle of its door).

If nothing happens when taking a photo, the player should move the crosshair around a little and zoom and keep trying until Noctis says he has the shot. The player must not exit out of the camera mode immediately after taking the shot, or it won't count, as there's a lag between taking the photo and the game registering it, likely due to needing to process the image. There needs to be enough daylight, or Noctis will say they need to come back the next day. Returning to the journalist with the pictures completes the quest. 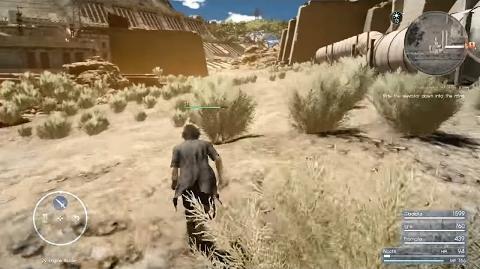 Cartanica has areas that can only be explored via an out of bounds glitch. The 1.00 version of this location is much less finished than the current version, and had no roads or cars. The area has been updated with new buildings, a more detailed coast, and Cindy Aurum's tow truck.

that appears to be the stairs from Cartanica train station.