Between Dali and Alexandria

The Cargo Ship is an airship in Final Fantasy IX used to transport cargo from the village of Dali to Alexandria. It is operated by black mages. The cargo is transported in barrels tied around the sides of the ship.

The cargo ship is one of the oldest Mist-powered airship models, whose engine has since been used as a basis for all other airships.[1]

The cargo ship is used to transport completed black mages from Dali to Alexandria. Steiner, who wants to return to Alexandria with Princess Garnet, tells the party the ship is going to Lindblum in his attempt to get the princess on-board. Zidane, Vivi, Steiner, and Garnet stow away on board the airship, and although Zidane knows Steiner is lying, he is planning on taking control of the airship and fly it where Garnet wants to go. Steiner boards the ship first while the others get on-board just in time before the cargo ship is about to take off, making Steiner momentarily believe he has accidentally left the princess in Dali.

On-board the ship they find it is manned by black mages. The mages are unresponsive and ignore them, even Vivi, who is shocked to meet black mages other than himself for the first time. Zidane enters the cockpit and takes control of the ship, as the black mages simply let him do it. Steiner is furious and commands Zidane to turn the ship around. Black Waltz 3 attacks the airship to kidnap Garnet, but when it attacks the party the black mages surround Vivi to protect him.

The Black Waltz blasts the black mages with his magic sending them falling off the ship. Vivi is infuriated and enters Trance, and while Vivi, Steiner and Zidane fight off the Black Waltz, Garnet is left in control of the ship. Zidane tells her she can either choose to go back to Alexandria, or fly through the South Gate to Lindblum. 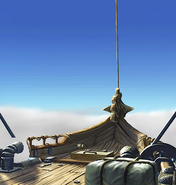 Artwork of the cargo ship above Dali.

Cargo Ship on the world map.