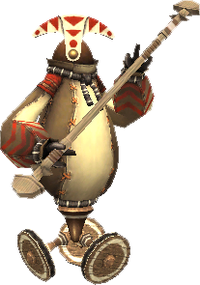 Cardians are Automaton guardians of the Federation of Windurst in Final Fantasy XI. They were created during the Crystal War by Minister Zonpa-Zippa of the Manustery to bolster Windurst's military ranks. Sometime after the war, for unclear reasons, many of the old generation Cardians went rogue and kidnapped Zonpa-Zippa. Most are seen lurking in the Horutoto Ruins. Windurst currently uses a newer generation of Cardians as guards, under the guidance of Zonpa's daughter, Apururu.

Cardians have a hierarchy based on a deck of cards: starting at Two and heading on up to Ace (the controller cardians). They are further defined by a "suit:" the older generation has archaic suits (Batons, Coins, Cups, and Swords), while the new generation guarding Windurst uses modern suits (Clubs, Diamonds, Hearts, Spades).

Cardians are essentially large dolls animated by the magical energy of the Horutoto Ruins. They are capable of detecting lies while also being incapable of lying. Professor Shantotto has expressed some interest in incorporating Near Eastern Automaton technology into Cardians.

Cardians come equipped with a job based on their suit, and will readily use the spells granted them in addition to their special attacks. Coins are Red Mages, Swords are Paladins, Batons are Black Mages, and Cups are White Mages. 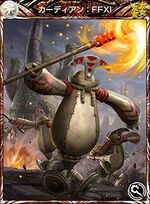