Non-player character
Carbuncle is a Cocoon fal'Cie in Final Fantasy XIII. Located in the Nutriculture Complex underneath Palumpolum, it supplies the city with food. Carbuncle is a large floating red crystal with butterfly-like wings adorned with two faces similar to the ones adorning Barthandelus. Its shape takes elements from Lindzei's crest

. Like most fal'Cie, Carbuncle is named after a recurring summoned monster from the Final Fantasy series; in the world of Final Fantasy XIII, the "summon Carbuncle" appears as a mascot for Nautilus.

A parallel process within the facility generates raw protein to supplement the vegetable foodstuff produced.

Hope shows Lightning the fal'Cie Carbuncle, with the latter wondering if they should attack it and thus destroy Cocoon's source of nourishment. Hope says they should leave it, since they do not want another reason for everyone to hate them.

The fal'Cie Carbuncle later appears in Orphan's Cradle when the party approaches one of the Eden waypoints. It, along with the other Cocoon fal'Cie, becomes dormant following Orphan's death.

A model for Carbuncle exists in the game disc of Final Fantasy XIII-2, although it never appears in the game, making it dummied content. 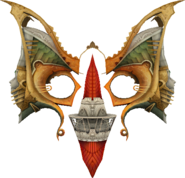 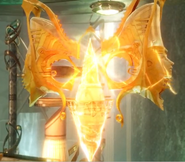 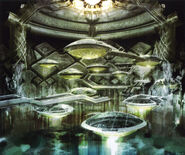 Like many of the fal'Cie, Carbuncle is named after a recurring summon in the series. [view · edit · purge]Carbuncle was a mythical creature reportedly sighted in the Americas by Spanish conquistadors. It is described as a small creature, either a bird or a mammal, that has a gem in its forehead crystallized from the brain of a dead dragon. According to myth, it is good luck to catch a carbuncle. A carbuncle is also an archaic name given to any red cabochon cut gemstone. The name applied particularly to red garnet.