Castle Exnine, The Coliseum, Library of the Ancients (Murkrift, Maxima)

That floating ruby is actually part of the carbuncle's body, and is used to unleash a variety of attacks. This cutie dreams of being a truckbuncle or trainbuncle...but never something so dreadfully ordinary as a planebuncle. (Get it? Plain/Plane? It's funny.)

Carbuncle is a boss in World of Final Fantasy.

Reflect magic back at it; requires a mu prism. 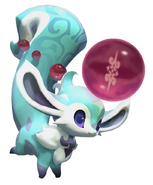 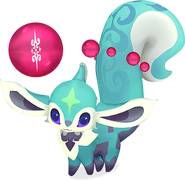