Don't be afraid! I'll protect you through your darkest dreams!

Carbuncle is a magical creature with healing powers that helps Noctis Lucis Caelum in Final Fantasy XV. It appears as a companion in Platinum Demo – Final Fantasy XV, leading young Noctis through his dreamscape. Upon completion of the demo, the player can name the Carbuncle and it appears in the full game with the name the player gave it. It is a Messenger, a magical creature sent by the gods. Though the other known Messengers help the Oracle and make the gods' will known to mankind, Carbuncle is a guardian being to Noctis.

Carbuncle is based on a recurring summon from the Final Fantasy series. Its incarnation in Final Fantasy XV resembles a fennec fox with its large ears and small snout. It has pale blue fur, brown eyes, and a puffy tail. There's a horn made of ruby on its forehead. Though it appears small and fragile, Carbuncle has potent healing powers.

King Regis gifted the Carbuncle totem to a three-year-old Noctis.[1] When the eight-year-old Noctis was attacked by an imperial Marilith, he was badly hurt and fell into a coma. While he recuperates, his father places the totem next to the unconscious Noctis. Carbuncle appears to Noctis in a dream world of his making, and communicates with him through a smartphone. Carbuncle explains Noctis is sleeping and being prevented from waking up by a force that wants his demise, but promises to help Noctis find a way out of the dream.

The young Noctis follows Carbuncle through a forest path and a room full of toys and other objects while in a shrunken state. Carbuncle helps Noctis fight the monsters that appear in his dream, and, finding their way to the Citadel, an Iron Giant appears. Noctis transforms into an adult and fights the Iron Giant with his full power while Carbuncle helps him by reviving him if he falls in battle. After the Iron Giant is felled Carbuncle leads Noctis to the Regalia, Regis's car and a place Noctis associates with safety and being with his father. Carbuncle tells Noctis its name and disappears as Noctis awakens, while promising to be with him and help him.

When Noctis awakens his father is by his side and the Carbuncle doll is next to him. Carbuncle is a magical creature and a Messenger that guides him that others cannot see. In Final Fantasy XV Prologue Parting Ways that depicts the day before Noctis's scheduled departure, Noctis makes sure to take the Carbuncle figurine with him to "keep them safe on the road".

Carbuncle acts as the player's guide. The player must follow it to progress through the story while the various game mechanics are being explained. Carbuncle will revive the player if they fall in battle, so the player can't get a Game Over in the demo. Completing the demo lets the player name Carbuncle.

Carbuncle orchesrates the tutorial the player is advised to take before starting a new game. The Citadel plaza is also accessible as a "training ground" during installation; once the game is installed, the option to "train" here disappears. The installation-period battle is an endless wave of goblins with Carbuncle following Noctis around the plaza. Noctis has the Two-Handed Sword, Broadsword, Javelin and Fire Elemancy on his weapon loadout.

In Easy Mode, Carbuncle will appear whenever the currently controlled character is KO'd in battle, bestowing a buff that significantly increases their attack and defense for the duration of the battle while completely restoring their HP. Carbuncle can appear indefinitely, though many harder hunts and locations will disable his appearance, indicated by a "no help icon". He can also randomly appear in the background of photos taken by Prompto. When fighting Garuda, Carbuncle won't be able to save the lead character even though the "no help" sign is disabled.

The player can get a Carbuncle-themed body paint

for the Regalia from JM Market in Altissia. Its description is: "A custom decal set featuring everyone's favorite Messenger. Guaranteed to make your car 150% more adorable." This is the only place of the game where Carbuncle is named a Messenger. The A Little Friend Sticker

In the free holiday DLC, Noctis attended a carnival with Carbuncle, who followed him through the various attractions. After accumulating enough medals, the player could attend the fireworks show with Carbuncle.

When Carbuncle was being photographed at the Moogle Chocobo Carnival and Noctis started parroting catch phrases from Prompto, he sometimes said he is "serving Prompto realness", a reference to the film Paris is Burning and the TV series RuPaul's Drag Race.

Final Fantasy XV: Episode Carbuncle is a manga series drawn by Kino Takahashi for Famitsu that follows the adventures of Carbuncle.[2][3]

"Carbuncle surprise" was a promotional campaign the player could partake in by pre-ordering the game.

During a flashback sequence, the young Lunafreya shows Noctis a page from the Cosmogony, showing the Messengers who are depicted with angel wings, Carbuncle included. Carbuncle appears between Gentiana and Lunafreya's two dogs, obscured by Luna's hand in the scene she shows the page to Noctis.

Carbuncle plushie is available as a prize from Taito crane machines in Japan. A T-shirt based on Episode Carbuncle has also been available from Square Enix Cafes in Japan. 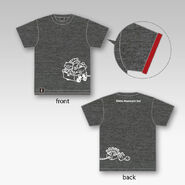 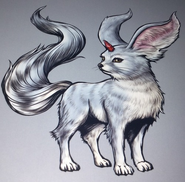 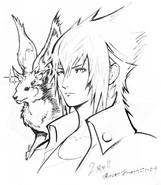 Carbuncle with a smartphone. 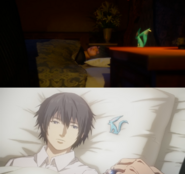 The crystallized dragon's blood from the mythology was said to cure any disease. Carbuncle in the Bible is a red precious gemstone said to be more radiant than a ruby, seen on the priestly breastplate of the High Priest of the Israelis in the Book of Exodus. The breastplate adorned with gems was said to represent God's will by His intervention regarding earthly affairs. Carbuncles and other red gems were believed to have powers to protect against bodily injury and drowning.