Draw from Iguions or Krysta

Carbuncle is a support Guardian Force in Final Fantasy VIII that bestows the party with Reflect. It is the first supportive Guardian Force the player can obtain, and the second GF obtained by drawing from a boss.

Its ability pool reflects its supportive role in battle. It learns HP, Vitality and Magic junctions, as well as status attack and defense junctions. It learns HP and Vitality boosting support abilities and Ability x3 that lets the junctioner equip three support abilities at once. Carbuncle is the first GF to learn Counter, which has the junctioner immediately use the Attack command on the enemy that hits them physically, and Auto-Reflect, that bestows a permanent Reflect status. Its unique ability is Recov Med-RF that lets the player refine recovery items from other items.

Carbuncle is a small pale green creature with a large red gem on its forehead from which its name derives from. It has tall blue-tipped ears, a small face, big bushy tail, rabbit-like hind legs and tiny paws. It stands upright and has a large tuft of fur on the top of its head.

Carbuncle is drawn from the Iguions when Squall and Irvine fight them during the Deling City parade. If missed, it can still be drawn from Krysta in the final dungeon. If missed on both occasions, it cannot be obtained in that playthrough. Obtaining Carbuncle in the Steam version earns the player the achievement Carbuncle.

Carbuncle is immediately useful, as in the next boss battle after obtaining it casting Reflect on the party makes the boss waste turns by using Dispel.

In its summoning animation, Carbuncle appears from a hole in the ground, jumps up and casts Ruby Light on the party, granting them the Reflect status before returning into the hole. Because Carbuncle is not a damage-dealing GF it cannot be boosted, and while it can learn SumMag+% abilities from items, they will have no effect.

The below values are the base compatibility values with all playable characters at the start of the game. Although Seifer cannot junction Carbuncle in a normal playthrough, a default value still exists for his compatibility.

Abilities learned naturally by Carbuncle are listed below:

Carbuncle is a Level 9 GF Card in Triple Triad for use in the minigame and for turning into 3 Glow Curtains with Quezacotl's Card Mod. It is won from CC Group Heart of Balamb Garden.

Carbuncle is a summon that casts Ruby Light to equal the opponent's Bravery with the summoner's. When summoned manually, the artwork of its Final Fantasy VIII appearance appears. Carbuncle's manual version is obtained in the Destiny Odyssey IV's second stage.

Carbuncle returns as a summon in Dissidia 012 with the same function. Its manual version can be purchased from certain Moogle Shops for 50 KP. 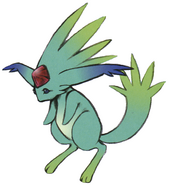 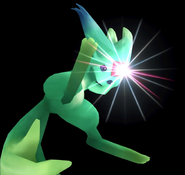 Its name in the French version is Ahuri, meaning bedazzled or stupefied.