The canoe (カヌー, Kanū?) is a recurring transport in the Final Fantasy series. It allows the party to travel across shallow waters and rivers.

The Circle of Sages gives the canoe to the Light Warriors for them to cross a river and land at Mount Gulg.

A small boat that can cross lakes and rivers.

When the party presents Scott's ring to Princess Hilda after infiltrating Fynn, Minwu joins them, bringing a canoe with him. The canoe cannot be used on oceans (dark-colored water).

The canoe is obtained in Castle Sasune after the Warriors of Light talk with the King. It can only travel over shallow water. The canoe is used to cross the small river blocking access to the Sealed Cave on the northern side of the continent. It can also be used to cross the rivers around Amur to reach Goldor Manor. Later, when the party gets the airship, the canoe becomes a mostly obsolete item.

A canoe and canoeist make a short appearance during the Chocobo Racing minigame, appearing in the scenery.

Filo finds a fold-up canoe in the Galbana. Using the canoe, the party can travel over shallow water on the world map. 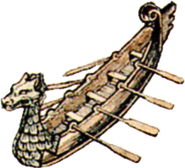 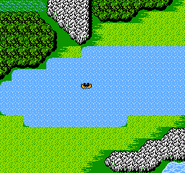 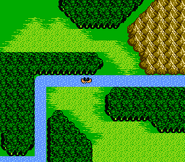