Tinkerers with the know-how to combine items into weapons both beautiful and destructive.

The Cannoneer is a job in the Game Boy Advance and the now defunct mobile and Steam versions of Final Fantasy V, found in the secret sea chasm.

The Cannoneer has a slight advantage over other physical-based jobs with its Open Fire command, as it allows them to deal damage while being in the back row, and allows the Cannoneer to equip weapons they do not necessarily need to attack with, and instead will help them survive longer, such as the Main Gauche.

The Cannoneer is similar to the Chemist in that their ability Combine allows them to mix a shot with an item for various effects. Ammunition can only be bought from the traveling merchant. The downside to the Cannoneer is that on their own they lack the damage output other physical-based jobs have, and struggle increasing their damage output at all.

Mastering Cannoneer for all four characters in the defunct mobile and Steam versions earns the achievement "Blistering Bombardment".

Cannoneers wear outfits reminiscent of privateers or the French army uniforms from the 19th century, giant hat and all. Faris is the only one without a hat. They have a small, white pouch of gunpowder by their waist. In the defunct mobile and Steam versions, the sprites are redrawn to resemble pirates, and lose their gunpowder pouches.

Upon mastery, Freelancers and Mimes gain the Cannoneer's base stats unless they already have a higher base from another mastered job.

Cannoneers have a modest set of equipment available to them. They can equip knives, swords, shields, magic hats, combat hats, robes, light armor, and armlets.

The Cannoneer is about random effects, similar to the Gambler job in the Final Fantasy series. The Open Fire command deals heavy non-elemental damage to one enemy, and may also inflict a random status ailment, including death, darkness, poison, or confuse. It also ignores row, making it generally preferable to use over normal attacks.

The chances of each status are as follows:

Cannoneer also teaches the valuable EXP Up ability, which allows characters to gain levels quickly by adding +50% EXP at the end of battles.

Artwork of Bartz as a Cannoneer.

Artwork of Lenna as a Cannoneer. 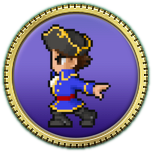 [view · edit · purge]Cannoneer is a term for an artillery gunner, first recorded in the 16th century. Current title is "cannon crewmember," shortened to "cannoneer." Modern cannoneers support infantry units in training and in battlefield are an integral part of combat operations ranging from urban to jungle terrains.