Cannoneer (砲撃士, Hougekishi?, lit. Bombardier) is a recurring job in the Final Fantasy series. The class uses cannons for various purposes, from direct damage to in inflicting statuses.

The Cannoneer is a secret job available in the Advance and mobile/Steam versions. The Cannoneer's most notable attack is its ability to deal random side-effects.

Cannoneer is a bangaa-exclusive job. Specialists of distance attacks, they can inflict massive damage to far-off enemies and adjust the range, strength, attack frequency, and accuracy of their cannons in the battlefield. 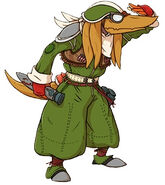 A bangaa Cannoneer in Final Fantasy Tactics A2: Grimoire of the Rift.

[view · edit · purge]Cannoneer is a term for an artillery gunner, first recorded in the 16th century. Current title is "cannon crewmember," shortened to "cannoneer." Modern cannoneers support infantry units in training and in battlefield are an integral part of combat operations ranging from urban to jungle terrains.

In Japanese the name is "bombardier", an archaic name for artillery crewman.